GOSSIPONTHIS.COM Celebs You Gotta Have Some Fat Pockets to Get in Courtney Love’s Drawls!
ShareTweet Despite being a sweaty, and often dirty, ex- drug addict, Courtney Love is now what one would call a “gold digger.”

The former wife of rock god Kurt Cobain recently made some frank revelations that she’s on the hunt for a wealthy lover.

“[These] days I’m only interested in plutocrats,” Love admits. “Like really, really rich guys. I’m determined to land one sooner or later. My favorite book these days is something called The Official Filthy Rich Handbook, which I study like the Talmud. The thing is, I think I can be a real asset to a wealthy man. I’ve always been a great girlfriend, but until recently I’ve struggled to stay single, because I had never been without a boyfriend before. It’s just my nature to couple up.”

Love, who was once linked to Chelsea Handler’s uber-wealthy hotelier boyfriend Andre Balasz also admits that it hasn’t been easy finding the right “fat cat” given her less than stellar reputation.

“I did really well with the boys for a while. But then I developed this reputation as a crazy drug addict and a lot of men were turned off by me,” she said. “Even now, in New york, my reputation is still pretty sh**ty. People still think that I’m the same sad skank I was in 2005.”

At least she’s honest about it. Which is more than we can say about some of you “undercover whores” nowadays. (Cough) Basketball “Wives” 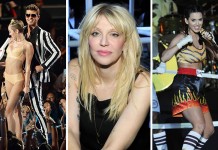