Christina Milian was spotted outside the Staples Center in Los Angeles Thursday night (Apr 21) ahead of the Prince “Welcome 2 America” Tour concert, where she was invited on stage to dance with the Purple One. “Yeah… I only just got off the stage from dancing with Prince.. Awe he’s the best,” she tweeted after the show. Fergie made a special appearance at Macy’s Herald Square in New York City Thursday to celebrate the launch of her Spring 2011 Fergie Footwear shoe collection. Kylie and Kendall Jenner (the Kardashians’ little sisters) attended the world premiere of the new movie ‘Prom’ Thursday night (Apr 21) at the El Capitan Theatre in Hollywood. The reality stars were also spotted at the premiere’s after party, held at Hollywood High School. Actress Garcelle Beauvais showed up at the Evening of Cocktails and Shopping to Benefit the Children’s Defense Fund hosted by Coach Wednesday at Bad Robot in Santa Monica, California. And Christina Aguilera brought her boyfriend Matthew Rutler along as The Abbey’s Gay Walk of Fame Honored her with a cocktail dinner at The Abbey in West Hollywood Wednesday night. 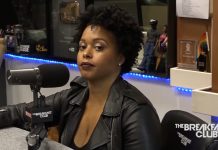 Chrisette Michele Apologizes for Performing at Trump’s Inauguration After Experiencing Continued Backlash: “I Regret Everything”