Hollywood bombshell Mila Kunis has responded to claims that her Black Swan castmate Natalie Portman didn’t perform her own dance moves in the Oscar winning flick.

The Oscar-winning actress has recently been the center of controversy after her body double Sarah Lane claimed she did 90% of Portman’s ballet steps in full-body shots. However, Natalie’s co-star Mila has come to her defense, saying that although the star didn’t perform every single detailed move, she “danced her ass off!”

“I think it’s unfortunate that this is coming out and taking attention away from [the praise] Natalie deserved and got. She’ll tell you [that], no, she was not on pointe when she did a fouetté. No one’s going to deny that. But she did do every ounce of every one of her dances.”

The Ukrainian-born Kunis also went on to add that Sarah was simply on standby for moves Natalie couldn’t perform herself. She told Entertainment Weekly:

“[She] wasn’t used for everything. It was more like a safety net. If Nat wasn’t able to do something, you’d have a safety net. The same thing that I had – I had a double as a safety net. We all did. No one ever denied it.”

Well, there you have it. Natalie Portman danced her ass off in Black Swan, no matter what that Sarah Lane lady has to say about it! 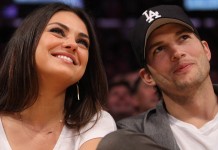 Ashton Kutcher & Mila Kunis Got Married (For Real This Time)