Lupe Fiasco must be one happy rapper right now!

According to Nielsen SoundScan, his 3rd studio album Lasers has knocked UK singer Adele off of the top spot and sold more than 204,000 copies in its first week, placing him in first position on the Billboard 200 Album Chart.

The “Kick, Push” rapper is also making waves over on the iTunes album chart. Again, he knocked Adele to the #2 spot which pushed Avril Lavigne’s 4th solo effort to #3. 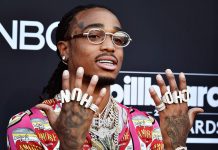