Former G-Unit rapper Young Buck may be going away for a long time. According to AllHipHop, Buck is facing up to ten years in prison for a gun charge from back in August.

Young Buck is facing serious jail time after being indicted today (March 7th), after being charged with being a convicted felon in possession of a .40 caliber pistol and ammunition.

Nashville’s WSMV Channel 4 reports that prosecutors unsealed the indictment today, for an incident that occurred around August 3rd, just as Federal agents raided his Hendersonville home over a $300,000 tax dispute with the IRS.

Young Buck has pleaded not guilty to the gun possession charge and has been released on $100,000 bond.

The rapper has a 2004 felony conviction for stabbing a man named Jimmy Lee Johnson during a fight at the Vibe Awards, after Johnson punched superstar producer Dr. Dre.

As a result of this conviction and the pending gun possession charge, Young Buck is facing up to ten years in prison.

The rapper was also forced to surrender his passport.

Damn….keep your head up, Buck! 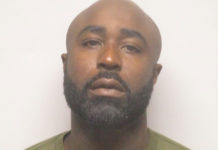 Mugshot Madness: Young Buck Arrested in Nashville on Felony Warrant, Held Without Bond Until May 2020