GOSSIPONTHIS.COM Pop Culture Rodney King Pulled Over in the Wake of the 20th Anniversary of...
ShareTweet

Just one day shy of the  20th anniversary of his infamous beat down at the hands of the Negro bashing L.A.P.D., Rodney King managed to get himself hit by the police yet again! But don’t go dialing up Al Sharpton just yet, because this time around King was only “hit” with a traffic ticket.

According to published reports, Cops in Arcadia, CA received a complaint about a man driving recklessly in a green Mitsubishi on Tuesday afternoon (March 1) … and when they finally located the vehicle, they saw that it was their old friend King behind the wheel.

A spokesman for the Arcadia Police Department told TMZ that King was pulled over after cops witnessed his vehicle making an unsafe lane change and when they approached the vehicle, King admitted he had been driving with an expired license.

The 40 year old King was cited for the expired license but was let off the hook on the reckless driving (they still owed him a solid from back in the day) and immediately called a friend to drive him home.

What a coincidence! Black History Month ends…and then this ish happens. What are the odds? 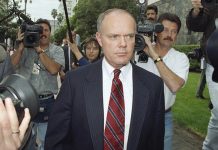 Rodney King Had Alcohol, PCP, Cocaine And Marijuana In His System When He Died