GOSSIPONTHIS.COM Celebs Gabriel Aubry and Nahla Spend a Day at the Zoo
ShareTweet Gabriel Aubry spent some quality daddy-daughter time with his baby girl Nahla at the zoo in Los Angeles Thursday (Feb 17).

Gabriel has been in the middle of a heated custody battle with Nahla’s mom, his ex Halle Berry, but now things are on their way to being resolved. The latest news between the former couple is that Halle was granted to take Nahla with her to New York City, where she’ll be filming a new movie.

Check out the pics of Gabriel and Nahla below!

It’s A Boy for Halle Berry and Olivier Martinez 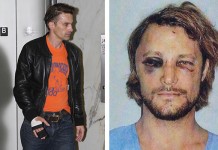 Who Started the Fight: Gabriel Aubry or Olivier Martinez?