The woman who ended up getting married U.S. Congressman Christopher Lee to resign after contacting her on Craigslist and sending out shirtless pics has spoken out!

Check out her interview with Gawker below:

Where were you when you found out the Congressman had resigned?
I was actually out on a date! It was a first date. It went OK. We had beer and sandwiches. My friends were texting, so I looked on my phone and saw your thing on Twitter, that he had resigned. Then I ate my sandwich and drank my beer. My date was actually from New York. He thought the whole thing was hilarious.

What do you think about the resignation?
I wouldn’t have thought he’d resign, over a few pictures and a few emails. I think maybe there’s a bigger story behind his resignation. I’m sure there are other women out there he’s met. My theory is, you don’t get caught your first time out.

Do you feel responsible?
No, I can’t say I do. I didn’t make him resign. I never even met him. Maybe his conscience is responsible.

Tell us about your Craigslist ad. Did any of the other responses work out?
I got about 30 responses. There were two other people I emailed with. One of them, we’re still in contact. The other one, the emails dwindled and we don’t talk anymore.

I’m reading the comments [on blog posts] and they’re like, ‘Oh, she’s a prostitute.’ But I’m not. I was just bored at work one day.

Why did you come forward with your story?
I was just sharing the story. I’m sure I could have sold the story, but that was not my motive, to become famous or do interviews. I live a very private life. I don’t expect anything out of it. I didn’t expect the man to resign. People have done a lot worse. It’s the D.C. area, so you have Congressmen with call women and escorts, but I’m neither one of those. It goes to show [that] almost everyone think it’s acceptable to be cheating, using whatever venue they can come across.

Do you have any advice for Rep. Christopher Lee’s wife?
Go get tested. I’m sure he hooked up with women from Craigslist who may have had, um, seedy paths.

In addition to talking to us, Lee’s would-be lover gave an interview to Loop21, an African-American news blog she likes. She knows that every major news outlet in America is interested in talking to her, but she doesn’t seem to care. She wants to stay “as anonymous as possible” and is playing it by ear.

By email, she added that she had one correction to our initial report:

We’re trying to figure out how this guy figured he was going to get away with doing something like that anyways. You are a United States Congressman for crying out loud! 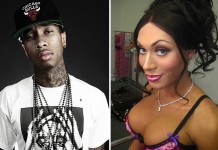