Ben Affleck wants to flex his directing muscles once again!

The actor, who won huge critical acclaim with his directing skills for “The Town,” is in talks to direct a crime drama tentatively titled “American Bullsh*t.” According to Deadline.com:

The project’s titled American Bullsh*t, an Eric Warren Singer-script. According to the Black List description, the drama’s described as “the true story of Abscam, the FBI’s 1980 undercover sting operation of Congress to root out corruption which was the brainchild of the world’s greatest con man.” (Source)

“American Bullsh*t” is believed to be backed by Sony Pictures Entertainment, and while Affleck has yet to commit to the project, he is said to be seriously considering the offer. 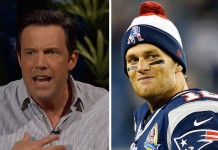