Scarlett Johansson showed off a new haircut Wednesday night (Oct 20) as she posed for pics on the red carpet of the 3rd Annual Mango Fashion Awards, which were held in Barcelona, Spain. The actress was on hand to present the honorary Mango Button Award to French designer Jean Paul Gaultier.

Meanwhile, the word on the sidewalk is that Johansson is in talks to star alongside Bradley Cooper in “Pride and Prejudice and Zombies” in a role recently vacated by Natalie Portman. Check out the exclusive report (via Deadline) below:

I’m told a lot of directors are lining up for Lionsgate’s Pride, Prejudice and Zombies, the Seth Grahame-Smith revisionist novel that enhances Jane Austen’s tale of class and manners in 19th Century England with the much-needed infusion of bloodthirsty brain-eating zombies. I’m told that after Natalie Portman backed out of playing Elizabeth Bennet, David O Russell had Scarlett Johansson ready to play the heroine and Bradley Cooper to play Mr. Darcy. (Source)

Check out a few pics below of Scarlett Johansson at the Mango Fashion Awards!! 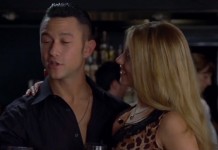