Earlier this week a rumor made its way around the web claiming that Def Jam head honcho Antonio “L.A.” Reid had lost his executive position in the company on the heels of poor record sales from the label’s top artists and him signing reject rapper Shyne to the prominent label. However, a spokesman for the label’s parent company Universal Music Group says that Reid still has a job despite the rumors of him being terminated.

“[The rumors] are completely untrue and without merit,” the spokesman told XXL. 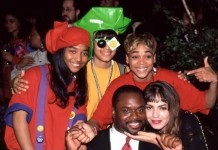 L.A. Reid is Leaving the “X Factor” to Focus on His Record Label