Actress Megan Fox knows exactly how to piss a director off!

According to our good friends over at PopEater.com, Shia LaBeouf‘s sexy co-star was recently dropped from upcoming film “Transformers” 3 and it may be due to some harsh remarks she made last year about the film’s director Michael Bay. In an interview with London’s Wonderland Magazine, Megan stated:

“[Bay] wants to be like Hitler on his sets, and he is. So he’s a nightmare to work for but when you get him away from set, and he’s not in director mode, I kind of really enjoy his personality because he’s so awkward, so hopelessly awkward,” Megan continued. “He has no social skills at all. And it’s endearing to watch him. He’s vulnerable and fragile in real life and then on set he’s a tyrant.”

However Megan is denying all accusations being made and according to the actress’ reps:

“It was her decision not to return. She wishes the franchise the best.”

Instead, Megan will be staring in the action film “Jonah Hex,” which hits theaters June 18th. Transformers 3 will be released Summer 2011. 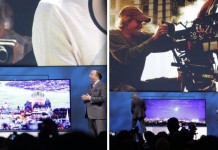 Michael Bay Has An Epic Meltdown, Storms Off Stage At CES