TV personality Niecy Nash talks about balancing her way through Hollywood as she covers the upcoming June 2010 issue of Ebony Magazine. Check out an excerpt straight from Ebony below:

Niecy Nash could very well be one of the hardest working Black women on TV these days. The sassy actress and television personality strutted her stuff for our cameras in an exclusive June Ebony photo shoot in Los Angeles with her new beau, Jay Tucker on the set. With so many things on her plate, like being the host on The Insider and the Style Network’s No. 1 show, Clean House, along with reflecting on her Dancing With The Stars stint, Nash has found balance and continues to surround herself with those who have a positive impact on her life. “My daddy told me, ‘Baby girl, nothing comes to a sleeper but a dream. If you want to do something, just do it,’” she said. “It really resonated with me. I hope my life will be an inspiration to people who want to pursue something.”

In related news, Niecy is no longer in the running to win ABC‘s “Dancing With the Stars.” She was eliminated from the ballroom competition show Tuesday night (May 11) after she received the lowest scores from the judges and didn’t get a lot of fan votes.

Nash, the bubbly host of reality show “Clean House” and an actress on “Reno 911!,” was joined in the bottom two by NFL footballer Chad Ochocinco after a grueling week in which the routines were upped to two apiece. But Nash, whose paso doble on Monday failed to match her Viennese waltz, said she was happy to have come this far. “I am a 40-year-old mother of three, I’ve got three C-sections under my belly,” she said. 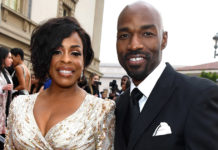