Courtney Love appeared on The Howard Stern Show today to promote her new album. Courtney was in her usual “crackish” form. She was an hour late to the interview simply because she was sitting on the floor in the Sirius/XM Studios’ lobby crying over the fact that some unknown guy gave her the boot after she him the goods.

Once Courtney Love finally arrived, she let Howard Stern egg her into admitting that she was on crack… as if we didn’t already know! And on top of this, she admitted that she has a fetish for women and once had a late night stand with none other than supermodel Kate Moss, who also used to smoke crack.

The Kate Moss revelation tumbled out of Courtney Love in response to one of Howard Stern’s staple questions. “You’ll get it on with other girls?” Stern asked Love. “My only one on one was-I was out of my mind-was the supermodel. And she’s notoriously, pretty much gay. And that’s because every girlfriend I have in London has had sex with her. So, some time in the 90s, sometime late 90s, um, I was in an Italian city with her and she pretty much chased me around the room. Literally, like she was the aggressor. And I thought: ‘ You know what? If you’re gonna do it, do it with that one. Do it with that one.’ It wasn’t Naomi Campbell for god’s sakes,….it’s just like a hot supermodel.”

Howard Stern steered the slurring rock star towards more details “You’re talking someone as hot as like a Gisele,” said Stern of supermodel Gisele Bundchen.. “Older than Gisele, but perennial,” replied Love coyly. “Like an Elle McPherson beautiful,” Stern continued. “Prettier,” replied Love, then imitated the as yet unnamed supermodel’s British accent: “Remember when we were in Milan?”

“Kate Moss!” exclaimed Robin Quivers in what had become a bizarro lesbian-supermodel version of What’s My Line? Love went silent for several seconds, then adopted a facetious tone and cooed: “Noooo. That’s not true.”

“You got it on with Kate Moss,” stated Howard Stern proudly, taking time to visualize. Love then gave up the denials and launched into graphic details. “I was really really wasted,” replied Love. “I don’t remember much, I just remember waking up in the morning and looking at this face…It was so feline and beautiful and she was asleep and I was like ‘Oh my God’.”

“It’s a major notch on your belt,” said Stern approvingly. Love then topped off the dirty detail with the perfect ironic cherry, stating: “I don’t want to out anyone who doesn’t want to be outed.”

Something tells us Kate probably didn’t want the whole world to know about this drunken one night stand… but we guess that’s a little too late now!

But check this out, not only did Courtney Love admit to crack usage and getting it on with Kate Moss, but she also talked about sleeping with Gwen Stefani‘s husband, Gavin Rossdale, whom she dated in the past (before he and Gwen Stefani tied the knot). She was on a roll! LOL 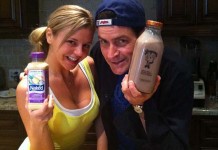