The View’s Sherri Shepherd and Clifford the Big Red Dog read together Thursday (Feb 11) at the kick off of Clifford’s “Be Big Campaign” at FAO Schwarz in New York City. Check out a few pics of Sherri and Clifford getting acquainted with each other below… Sherri’s ex husband has publicly asked her to stop using their divorce as material for what she talks about on The View for the sake of their 4-year-old son.

In an open letter obtained by RadarOnline.com, Tarpley points to Shepherd’s habit of highlighting his infidelity and their breakup while hosting The View, doing standup, giving interviews, and even on her Lifetime show Sherri that has one character based on Tarpley. The couple, who broke up five years ago after eight years of marriage, has a four year old son together.

Peep the full letter below:

“Having a relationship and children with a person in the limelight – someone who gets to express her thoughts, beliefs, opinions and grievances to the world on a daily basis – is not an easy proposition.

“Sherri Shepherd, to whom I was married for 8 years and have an amazing son with, has openly discussed and distorted details of our marriage for close to six years following our break-up. To this very day, my name is consistently dragged through the mud at her every opportunity. Sherri, don’t you think it’s time to move on?

“I’ve held my head high and kept silent as she continues to give interview after interview re-living the hardship she endured during the end of our marriage, while consistently airing our dirty laundry on The View. Though I believe the high road is typically the best course of action, it’s time that I take the opportunity to say, ‘Enough is enough!’

“Mistakes have been made, but they have not been one-sided, as the public is consistently led to believe. Though Sherri claims to be transparent, what good is transparency when you’re not taking ownership of your own faults? And while some might find her comments entertaining, to me and my loved ones they’re hurtful, misguided and spiteful. No matter how much she says she’s reached a place of forgiveness, her comments and actions clearly do not demonstrate this.

“Sherri knows that I value my privacy, which is violated every time she discusses our relationship, and my alleged faults and shortcomings. There’s not a day that goes by when I do not get calls or emails from friends letting me know they’ve either seen her on TV or in the media saying disparaging things about me. I can’t visit family without her most recent comments about me becoming the focus of discussion. Every aspect of my life is affected by her spiteful accusations; everywhere I go, people formulate incorrect opinions about me once they find out I’m the guy Sherri Shepherd always bashes. I’m not sure if this is her intention, but as we approach six years of this, isn’t it time to move on? Her misrepresentation of me and twisted facts surrounding our break-up are affecting my life and hurting my career.

“What’s shocking is that despite her steady stream of negative comments about me, and inaccurate portrayal of me on her Lifetime sitcom, I still receive gifts from her. Most recently, she sent me a Kevin Garnett Celtics jersey. Are these gifts a way of making her public accusations about me okay? It’s not that simple. My happiness and peace of mind cannot be bought. The only gift I want is for Sherri to move on with her life and stop using her talk show, her sitcom and national magazines to destroy my reputation.

“Though I’ve withheld my feelings for over five years in hopes that her animosity directed at me publicly would eventually subside, it continues to rage on. Sherri Shepherd has used every opportunity at her disposal to rehash my mistakes, comparing me to John Gosselin, Tiger Woods, Charlie Sheen, David Letterman, Eliot Spitzer and, most recently, John Edwards on a recent taping of The View. I know she’s fully aware that we have both done things that contributed to the demise of our marriage, which is why I can’t understand why she’s crucifying me over five years after our break-up.

“Sherri’s career has sky-rocketed, and regardless of how she’s unfairly treated me publicly, I truly wish her the best. She is, after all, the mother of my son. I’ve owned up to the mistakes I’ve made and I never claimed to be perfect. All I ask is that that she no longer dwell on the past; and instead, let’s move on with our lives while providing our son the best possible care. Can you imagine if I were the one with a hit daytime talk show and trashed her at every available opportunity; or created a character in a sitcom for the sole purpose of attacking her reputation? I know Sherri, and she would have spoken out well before year five; probably before hour five.

“The issues in our marriage that Sherri continually refers to happened around the time that Jeffrey was born. One thing Sherri never can deny nor has denied is the deep love and close bond I have with our son. Jeffrey will soon be socializing and interacting with other children, and eventually he will be able to search the Internet, where he’ll find article after article and countless video clips of his mom exacting a public revenge against his dad. Jeffrey does not deserve to grow up knowing that his mom used her notoriety to paint an inaccurate picture of his dad for the world to see. If not for me, it’s time to move on for the sake of our son.” 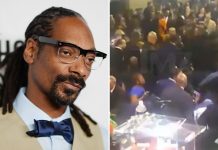