Sheree Whitfield of Bravo’s “Housewives of Atlanta” fame had her home foreclosed back in March, but she had no idea the person she hired (Sheila Rashad – pictured to the left) to help her with her situation with the bank/mortgage company would steal her belongings right from from under her nose! Apparently, the Sheila Rashad lady was a big fraud and led Sheree on and had her thinking that she was handling business (she even had her sign FAKE forms!) when in fact, she wasn’t.

And when Sheree found out she only had 6 days to move her children and their belongings from their 10,000 square foot Atlanta home in early March ’09, Sheila rented a moving truck and cleaned house (literally) after Sheree moved what she could.

Anyway, this is the full story via FreddyO:

Bob was under court order to maintain ALL household expenses. He failed to do so. Nor did he offer to pay the child support that he had not payed going on almost two years. I met Sheila Rashad through Bobs mom. (seem like at set too me) and we began to occasionally communicate regarding business around Oct 2008. I then received foreclosure notice (last wk in Dec) saying that my house would begin foreclosure on the date of Feb 3rd. All this happened the week after Bob and I went into mediation in which he tried to renegotiate my settlement from the judge and offer me cash from the sell of the house that he knew he was losing because of nonpayment of the mortgage.

Sheila Rashad offered to help saying this is what she does for some of her clients and could help facilitate things and allow us to remain in the house for at least six months as long as I continued to maintain the property, paid a set amount and make the property available for agents to show. Sheila had me sign a fictitious form stating that I give her rights to communicate with the mortgage company. She continuously lied and said she had been communicating with the mortgage company and she had everything under control.

She called and said that the bank decided against my favor. And my kids and I needed to vacate the premises on March 6th instead of March 7th with all of my things in less than six days. It was impossible to clear out a 10,000 sq foot house in this amount of time. I moved what I could and left on March 5th. On March 6th I sent people to meet Sheila with the keys to the house, because she said that she was meeting the realtor and the sheriff. She instructed my people not to remove anything else from the house. My people then left.

The next day I happened to ride by the property and seen a Penske moving truck in the driveway. I then got nervous and called a few friends who immediately ordered that I pull into the driveway to see what was going on. Upon pulling up behind the truck I noticed kids playing with toys I had left behind. I then seen the Mexican workers loading the truck, along with Sheila Rashad and her husband. I approached her and she began to say that I was trespassing and the sheriff was on the way and I needed to leave the premises. I left and called my friends and within fifteen mins we were back at the house. Sheila put the lock back on the gate but apparently she was very nervous because she left all the doors open including the garages.

We went into the house and seen that she had stolen dishwashers, the oven, built in microwaves, warmer, cabinets, bathroom sinks, my built in closets, furniture, fixtures, electronics, workout equipment, and clothes. ALMOST EVERYTHING. The four of us are there in disbelief. We took a few pictures and I got on the line and called the police. Sheila and her husband came back with the carpenter (See Pics) and she continued to stick with her story that the people were behind them and we needed to leave. She knew that I wasn’t hearing it so she left.

The police came and I filed a police report. The witnesses were there and gave there statements as well. The officer had me call her on my phone. He told her she should return to give her statement because I was accusing her of theft. She refused.

“I like to believe in the best of people,” she said. “I don’t want to believe that people can look you and your kids in the eye and smile and yet be so devious, conniving, and greedy to the point where they would do anything for a dollar. I am blessed to have God on my side who gives me my strength to carry on.”

That was definitely a lot to take in but you should definitely watch out who you put over your personal affairs. You just can’t trust folks these days. Homegirl probably made a killing off of all those appliances, electronics, workout equipment, etc. SMH… 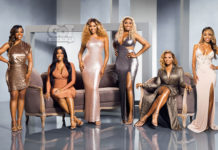 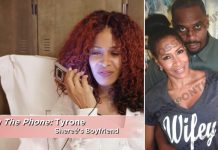