After months of searching, BET has finally found a new set of personalities to host their music video countdown show “106 & Park.”

The network made the big reveal on Monday’s (Oct 1) edition of the show. In replace of former hosts Terrence J and Rocsi, BET’s “106 & Park” will now be hosted by Miss Mykie, Kimberly “Paigion” Walker, Shorty Da Prince and Shad Moss, best known as the rapper Bow Bow. As you can tell, BET has decided to ditch the two-person (1 guy, 1 girl) hosting setup in favor of a four-host (2 guys, 2 girls) production. Last Friday (Sep 28), Terrence Jenkins and Rocsi Diaz were joined by Pooch Hall, LaLa Anthony, Jim Jones, French Montana, and many others as they bid farewell to “106 & Park” after 7 years.

“We’re so proud of Terrence and Rocsi as they head into the next phases of their careers,” said BET President Stephen Hill.

“They leave behind the legacies of being the longest running hosts of 106 & Park as well as the hosts that presided over the show’s most successful season ever. I will miss their energy, wit, talent and professionalism on-the-job, but look forward to celebrating with them their successes that lie ahead.”

Terrence J is set to appear as a new co-host on E! News, while his co-host Rocsi will moving from New York to Los Angeles to pursue an acting career.

BET’s “106 & Park,” which premiered in 2000, is one of the longest running shows of its kind, and has long been a promotional platform for recording artists and entertainers.

“106” will continue to air weekdays, Monday through Friday, on BET at 6 pm ET. 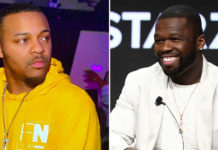