Game has officially turned in his player’s card!

Game made the proposal special by showing up at Frank D. Parent Elementary school (where she works as a teacher) and popping the question while cameras were rolling.

“As a man, this is that day where you throw your player card away and you kinda gotta step up and be a family man, and she deserves it,” Game told MTV News immediately following the proposal. “It’s been a long run, and we’ve been together at least seven years. We’ve been off, we’ve been on, we’ve been arguing, we fought. We had good times and bad times, and I think that at the end of the day, as a man, this is something that I owed to her and I owed to my family, so it was time.”

Game and his new fiance have two children together: a son, King Justice and a daughter, Cali. Game also has a son named Harlem from a previous relationship. 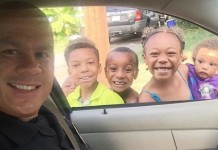