GOSSIPONTHIS.COM Celebs Adele Performs “Someone Like You” at the 2011 MTV VMAs
ShareTweet All soul singer Adele needed was a microphone and a piano to deliver a classy rendition of “Someone Like You” Sunday night (Aug 28) at the 2011 MTV Video Music Awards.

Proving that she doesn’t need fireworks or a fancy light show to give a good performance, Adele, dressed in a sophisticated black dress, belted the notes out to her debut (platinum-selling) album 21’s second single in a performance similar to that of a jazz musician at a small, intimate nightclub. 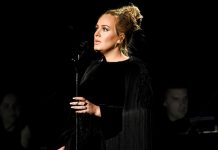