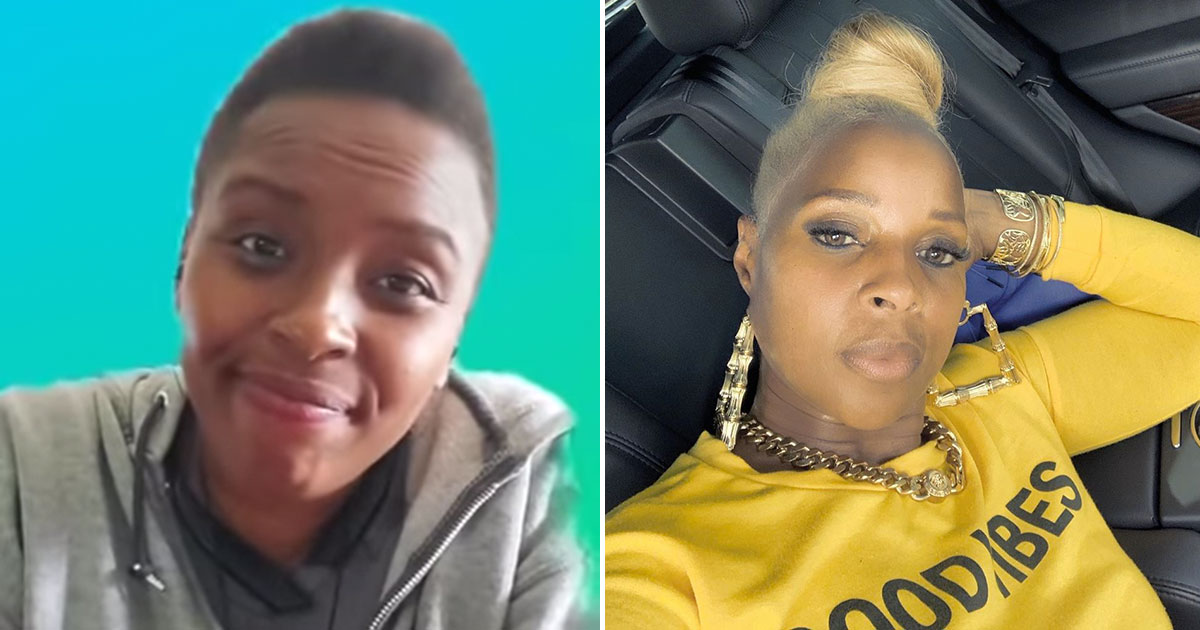 Philadelphia singer Jaguar Wright made headlines last month when she accused Common of sexual assaulting her while she was trying to sleep and claimed Black Thought used ghostwriters.

Since then, she’s continued to make shocking claims against notable musicians and industry figures (especially Neo-Soul artists), including a strange claim that she could tell Summer Walker has been sexually assaulted before … and now she has her sights set on Mary J. Blige.

On Wednesday (Sep. 23), Jaguar went on a rant on Instagram against the Grammy-winning artist, accusing her of being a “fraud” who allegedly faked her marriage to Kendu Isaacs and suggesting that the R&B icon is a closeted lesbian.

“Freedom of speech is what this country is built on! Speak your mind! Just know that [videotape] my friend has of @therealmaryjblige eating her out is real!” she wrote in reply to an IG user’s comment.

“That bitch is a whole fraud! And her whole marriage to @kendu_isaacs was arranged! Maybe @therealmaryjblige girlfriend liked her husband better?! Who knows! I told y’all … I got tapes on everyone!”

Wright shared a screenshot of her comment on her page and wrote in the caption: “Like I Said … I have tapes on er’body! I was a smut dealer for many years until I returned to #christ .. but .. leverage is leverage and revenge is a dish best served cold!”

It’s unclear what prompted Jaguar’s anger towards Mary J, but hours earlier, she challenged Mary to a Verzuz battle.

“Am officially declaring that I’ll do a vs challenge with the one and only #MARYJBLIGE .. I’ll sing you to sleep! On my deceased son I’ll sing dat a** into a long nap!” she wrote in her post.

Wright also got fired up in a video she posted the same day.

She continued: “But when you start calling me a crackhead when you smoke crack and everybody know it. When you start bringing my dead son into it, I’m done. I ain’t ruin my life, but I think you’re about to ruin yours, Mary J. Blige.

“Just accept the challenge… We can just jump in front of the mic. That’s all I need. One mic. I’ll do it a cappella if you want, make it easy for you.”

Jaguar Wright’s tirade against the Queen of Hip-Hop soul didn’t end there.

She also went on Instagram Live and once again challenged MJB to a Verzuz battle before questioning her talent and, again, accusing her of hiding her sexuality.

“I can write my own songs, I can produce my own songs,” Wright said. “I can sit down with a competent mix engineer and walk all the way through a mix. I can do those things Mary, can you?

“What can you do, Mary? Other than play dress up and eat snatch in dark places hoping nobody finds out you’re gay. And If I’m lying, sue me Mary. If you got the heart, let’s do the Verzuz. Or if you want to apologize to me for the way you tried to destroy my career at it’s very beginning, you can do that, too.”

“We’re talking about Mary J. Blige,” Wright said in response to a commenter who asked her to confirm who she was addressing. “That’s who I’m talking about. She likes to talk about me behind my back.

“Bitch I’m gonna talk about you to your face, how about that? If I’m lying about anything I said about you, you closeted freak…sue me. I mean, isn’t that your girlfriend that Kendu with? And they living off of your money?”

According to Wright, the reason why Mary J. Blige performed and accepted her lifetime achievement award at the 2019 BET Awards was so that she could pay her ex-husband, Kendu Isaacs, after their divorce.

Wright also referenced Mary’s character on Power Book II: Ghost and said she’s not acting, but playing who she is in real life.

“You ain’t acting, bitch, you being yourself,” she said. “You’re an ignorant, disloyal, ungrateful bitch, and I’m gonna call you a bitch until you start acting like a woman because that fancy dog collar that Puff got around your neck and has had around your neck for the past 30 years … it should’ve been done got tight. It don’t feel like a noose, Mary? It don’t feel like a noose being yanked around by a bunch of ni**as all the time?”