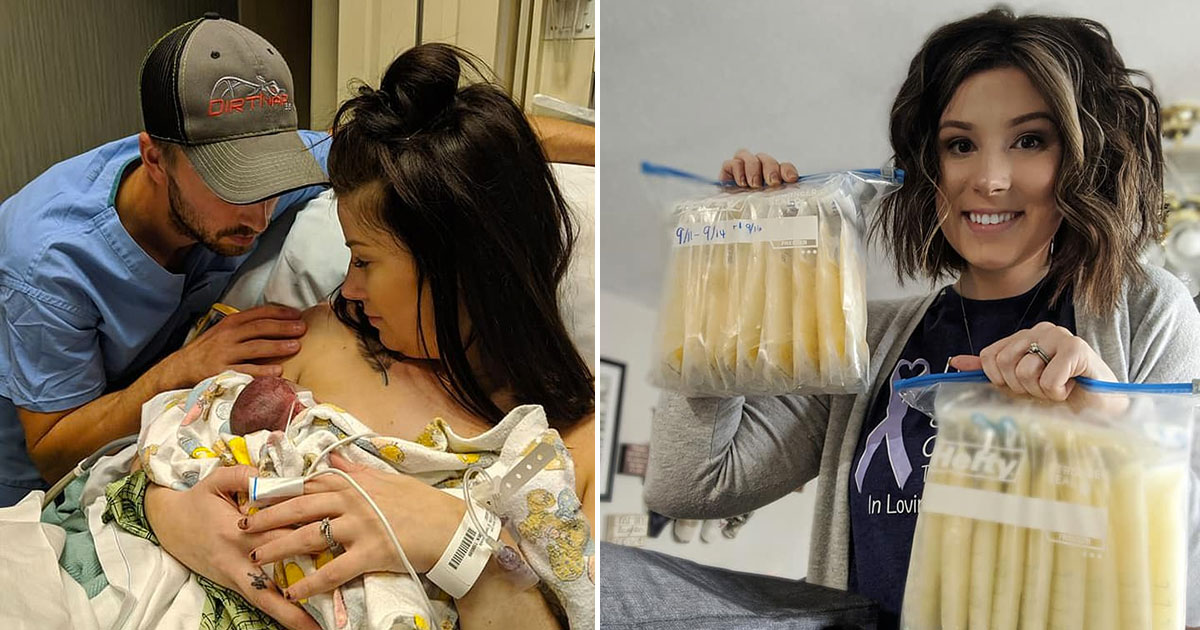 A grieving mother is being hailed for her selflessness after she spent two months pumping breast milk to donate to other babies after losing her own newborn son just three hours after his birth.

Sierra Strangfeld of Neillsville, Wisconsin was 20 weeks pregnant when she found out her unborn son was diagnosed with trisomy 18—a rare and fatal genetic disorder that causes deformities of body parts and organs, and causes the death of infants within 24 hours of their birth, if they even make it to term. Just five percent survive for more than a year.

Strangfeld, who also has an 18-month-old daughter named Porter, told TODAY Parents that when she and her husband found out about their new baby’s condition, they never considered abortion.

“Termination was not an option for us — that was never a question,” Strangfeld said. “We wanted to meet this precious gift, and we were going to do anything we could to meet him and treat him like any baby we would be blessed with … We had a lot of decisions to make, but the problem was we thought we had time and we didn’t.”

On September 5th, more than two dates before her due date in November, Strangfeld found out that because of the baby’s condition, he would most likely due in utero within a week, so she and her husband decided to go on ahead and have the baby right then and there.

Baby Samuel Lee was born that day via emergency C-section. He weighed less than two pounds and lived for only three hours.

“Samuel only left my arms once, when he had an oxygen tube put in, otherwise he spent those three hours with us,” Strangfeld said.

“I was able to do skin-to-skin with him and his heart rate and oxygen levels immediately raised. It was like he knew he was with his mom. We got a few squeaks out of him, and spent those three hours looking at every detail of his tiny body. Those hours felt like minutes.”

During that short time frame, Strangfeld decided to pump her breastmilk and donate it to a NICU breast milk bank to help other mothers with prematurely born babies while also leaving behind a legacy for little Samuel.

From the day of Samuel’s birth and death, Strangfeld spent 63 days pumping, and ended up being able to donate 500 ounces of breastmilk to the Mother’s Milk Bank of the Western Great Lakes on November 13th, which was also Samuel’s due date.

“It was a good feeling, knowing I was going to help someone else in need, but it was also very emotional,” Strangfeld recalled. “I could feed a complete stranger’s baby, but I never got to feed my own.”

In an emotional Facebook post that has since gone viral, Strangfeld wrote: “I couldn’t save Samuel’s life, but maybe I could save another baby’s life … Part of me felt it was the only thing connecting me to Samuel here on Earthside. I sure hope he’s proud of me!”