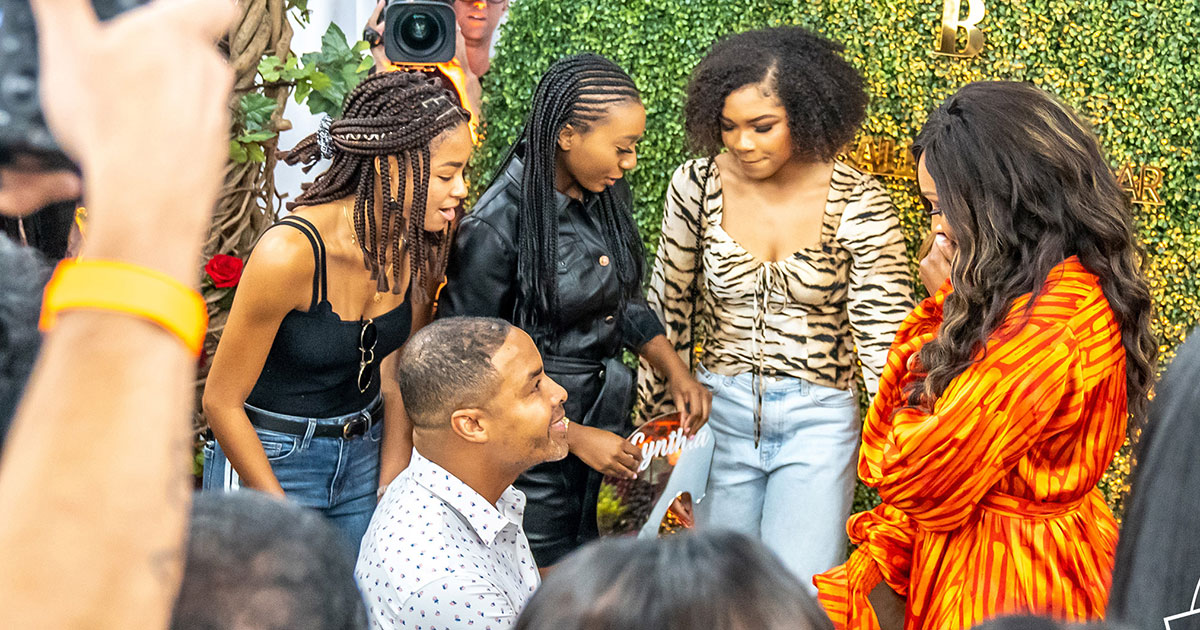 Cynthia Bailey is getting married! (Again.)

The Real Housewives of Atlanta star was on the receiving end of a grand marriage proposal from her boyfriend, sportscaster Mike Hill, and according to People, she said yes!

The magazine reports that Hill proposed to Bailey Friday (Jul. 26) in Atlanta at the grand opening of her new business, The Bailey WineCeller. 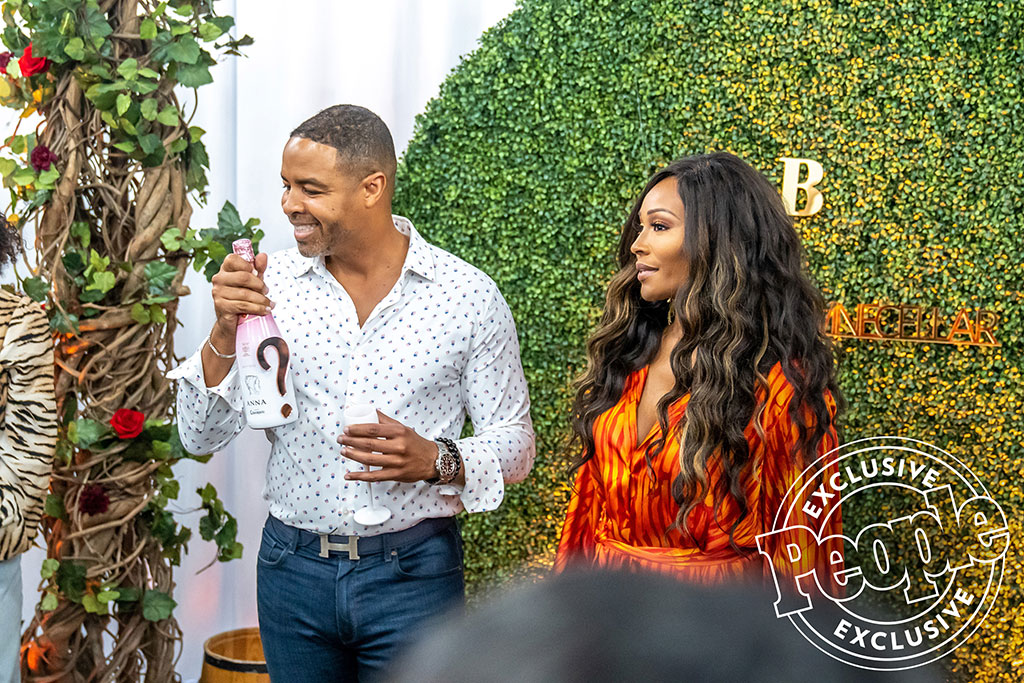 The surprise proposal was attended by Bailey’s 19-year-old daughter Noelle Robinson as well as Hill’s teen daughters—Kayla, 17, and Ashlee, 19—along with a crowd of the couple’s closest friends and Bailey’s RHOA castmates. 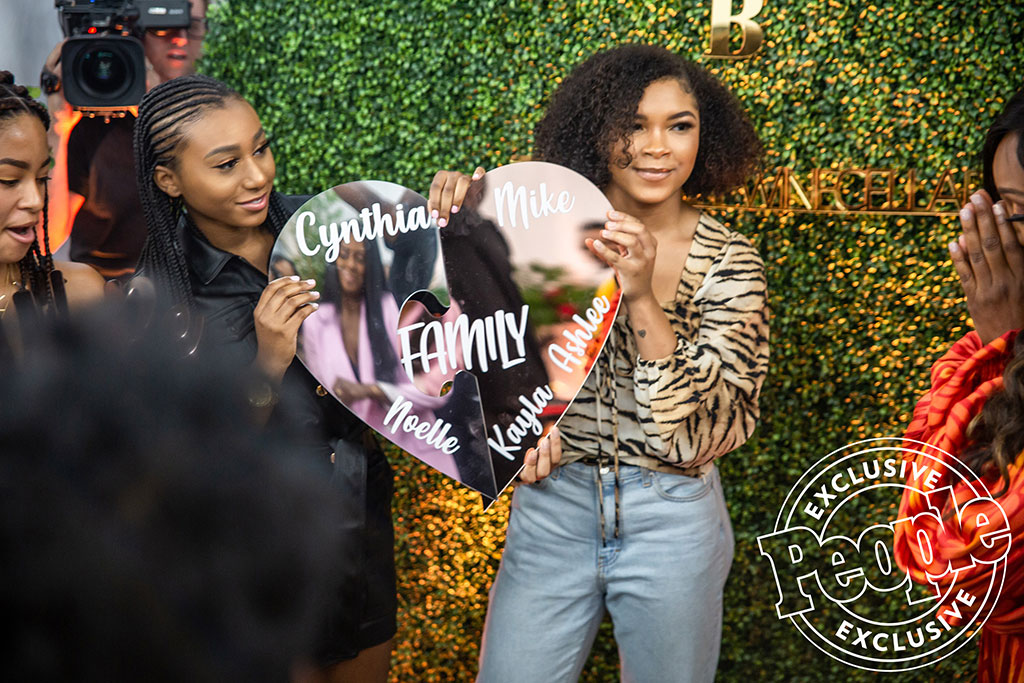 If you’re wondering how Hill was able to pull off the surprise, People has you covered right here:

…He had a little help from celebrity event planner, Courtney Ajinça. The two threw Bailey off the track by making it appear that Hill was giving a toast in honor of Bailey’s opening.

According to a source on the scene, during Hill’s speech, Kayla interrupted to hand him a bottle with a big question mark on it — telling him, “No dad, I think you should propose like this.”

Then, he told Noelle that he needed her help to open the bottle and she passed him the ring box, helping him open that before he dropped to one knee and professed his love.

As he did, Noelle, Kayla and Ashlee all gathered behind him with a hand-made puzzle piece sign that real, “Can we be a family?”

It all turned Bailey into a ball of emotions. Though she was confused at first, Bailey broke down in tears when she saw Hill get down on one knee and ask her the big question. She quickly said yes.

The crowd quickly erupted in applause, the source tells PEOPLE, chanting “Congratulations Chill!” — the nickname Bailey and Hill have adapted on social media.

Cynthia Bailey and Mike Hill, who currently works from Los Angeles at Fox Sports 1, have been dating for 14 months and this will be the second marriage for both of them.

Bailey was previously married to Peter Thomas between 2010 and 2017.

Despite her divorce being so recent, Bailey has said that she would gladly walk down the aisle again, as long as it’s Mike.

“I had no desire to marry again after my divorce, none whatsoever,” she told Ebony magazine last November.

“Then I had to change that narrative to be more open because I don’t know what God has in store for me. If it’s God’s will, if it happens, it happens, but I still was not looking for that.”

Bailey added: “When I met Mike, I didn’t get the feeling that I had to get married, I just have to be with him, whatever that looks like.

“If that looks like we’re moving in together, that’s fine. If that means we’re getting married, that’s fine, I just know that I want to be with him. So yes, the door is still open. Let me be specific, the door is open for Mike Hill.”

She told People the following December: “I want to marry Mike. I love Mike. He’s my soulmate. We talk about getting married all the time.

“I’m hoping a proposal will happen soon, if not before the end of this year, then hopefully next. I’ve certainly been dropping enough hints! But God has a plan, so I’m just letting it go.”

Bailey expressed similar sentiments during an appearance on The Real back in March, saying that she knew she would be marrying Mike “sometime next year.”

“Well, I want to marry this man. I love this man. We have time. When Mike is ready and when God is ready, that’s when we will get married. However, I do predict that Mike and God will be ready sometime next year. Praise God!” she said as Mike laughed from the audience.

Cynthia is currently filming RHOA Season 12, which is expected to premiere in the fall, and it looks like her storyline is already set for the next two seasons.