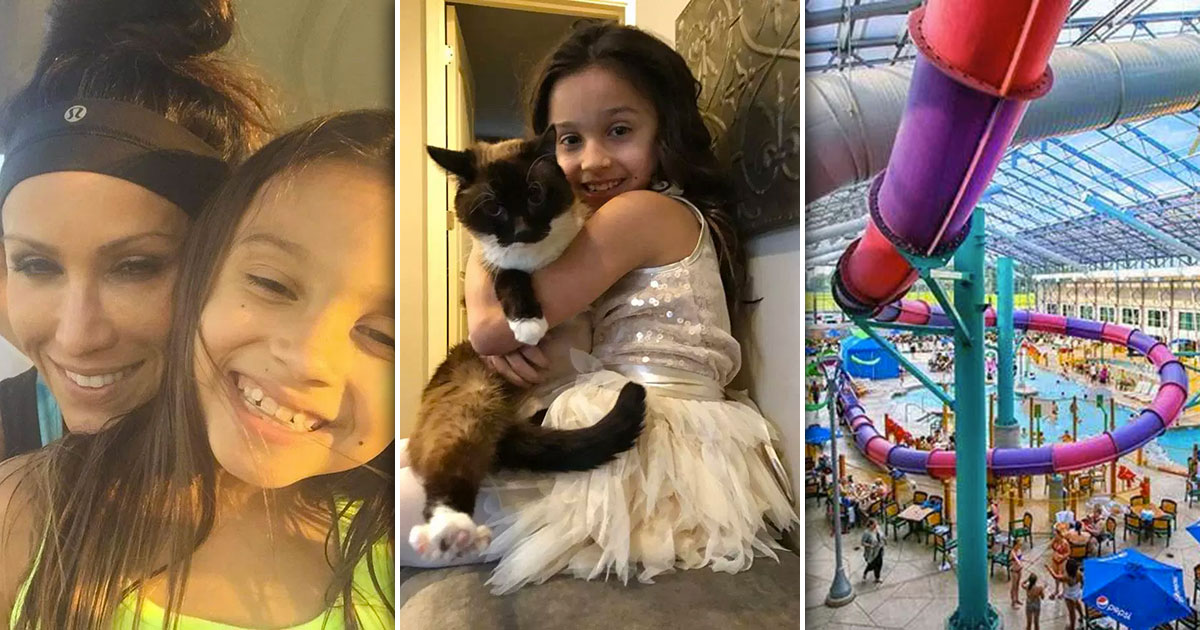 A Michigan girl excited to ride the biggest water slide in the park for the first time reportedly “died from excitement” after she went into cardiac arrest while plunging down the 273-foot tube.

And in February 2018, during a family trip to the indoor water park, when London found out she finally made the height requirement, she excitedly headed straight for the slide and eagerly waited for her turn to drop down the four-story chute.

According to the water park’s website, the ride—which has a 48-inch minimum height requirement—plunges riders down 273 feet with a 360-degree loop in just 6.9 seconds.

“We’re going to get some footage of our water slides, so stay tuned for more videos,” London said in a short video she filmed with her sister Eden before heading down the slide.

Unfortunately, by the time London reached the end of the slide, she was unresponsive and had to be rushed to the hospital.

“London looked at her dad, gave two thumbs up and smiled, went down the slide and came out in cardiac arrest,” London’s mother Tina told UK newspaper The Sun.

While hospitalized, doctors discovered Lauren had Long QT syndrome—a heart rhythm disorder that can cause heartbeat palpitations, fainting, drowning, and sudden death due to cardiac arrest, which is what happened to London.

Tina was sitting on the other side of the park when she heard a whistle go off, which she thought were some children “just messing around.”

“But within maybe minutes, I started seeing women looking terrified,” Tina said. “One woman was walking with two children, grabbing them. She said, ‘Somebody’s drowned over there.’ I kind of got nervous.”

Tina then tried to call her husband Jerry, but found out she had his phone. She ran over to the slide to see what was going on.

“[Jerry] was looking down and there were sheets up and I knew it was one of my kids,” Tina said. “It was an awful thing.”

According to doctors, it was the excitement that killed London. Tina said her daughter, a gymnast, never showed any symptoms of the condition doctors said she had.

“There were no signs of the condition… She just dropped,” Tina said. “The day before, she had been doing flips in the air.”

At the hospital, London was placed on life support and her parents took turns staying with her as the hours turned to days.

“The one night we both came home – I was just wanting to take a shower and come back – I got a phone call from my dad who was with her. She’d gone into cardiac arrest again,’ Tina recalled.

London passed away after nine days on life support.

“I would have taken her home with the brain damage but I’m glad she made that choice for us,” Tina said. “She fought for nine days in the hospital, then she gained her angel wings.”

A few days after her passing, London was laid to rest in the same dress she would have worn at her school’s father-daughter dance, which was held on the same day as her funeral.

“I didn’t have a chance to buy shoes,” Tina said. “She looked like an angel with her dress and no shoes. She really did look like a sleeping beauty.”

Tina said that life without London has been an “ongoing nightmare” and she cries herself to sleep every night. But she wants to make sure no family has to go through what she’s gone through, so she’s since trained to become an instructor for the American Heart Association and launched a foundation to help grant defibrillators to the community.

No defibrillators were used when London suffered cardiac arrest at the water park, which is something that Tina wants to change.

“You have to respond, you don’t have time to wait,” she said. “I think people are afraid of defibrillators, but they’re very easy to use. They’re what is needed to bring back the rhythm.”

According to WJRT, Tina and her sister, Dr. Kristina Nikolakeas, are writing legislation that would require genetic testing for heart defects at birth, which is something Tina believes could have saves her daughter’s life as well.

Tina is also reportedly working to make AED drills—also known as sudden cardiac arrest drills—mandated in schools across the state of Michigan, and she joined forces with Jennifer Shea, who manages the student heart check program at a local hospital, for the cause.

“What we want them to be able to do is to respond with the AED in an appropriate amount of time, which is at best three minutes,” She said. “And so, that takes a lot of coordination and it’s something that you really need to practice. We have multiple fire drills each year in school and the last time a child died in school because of a fire was in 1927.”