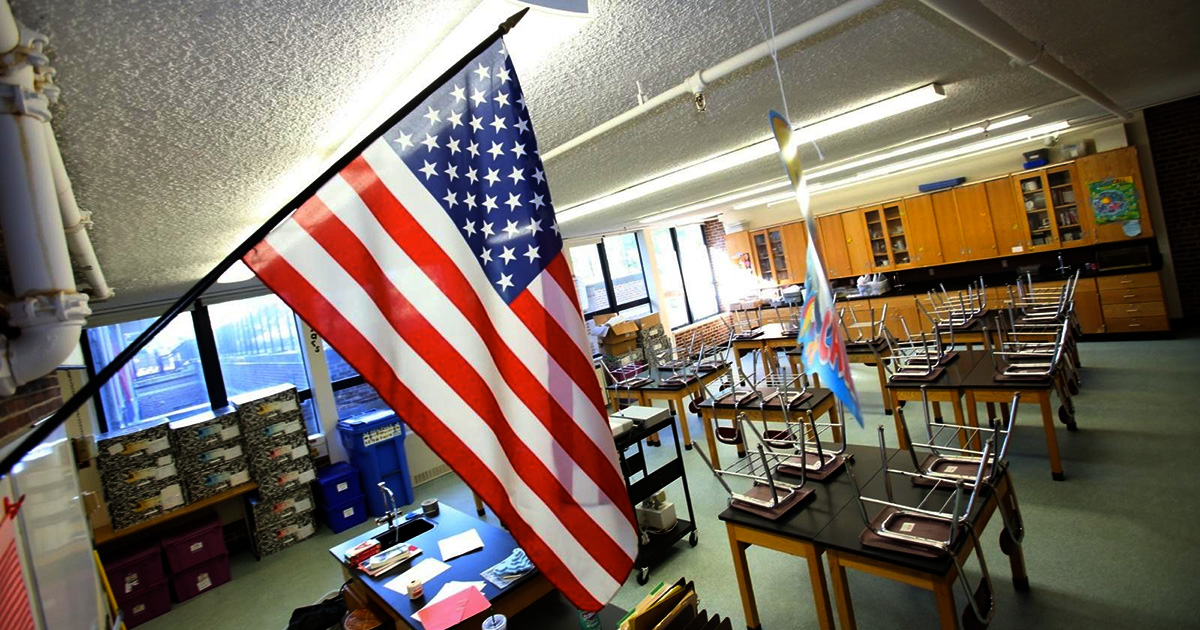 An 11-year-old student in Florida who refused to stand and recite the Pledge of Allegiance was kicked out of a classroom before he was eventually arrested and hauled off to a juvenile detention center for being “disruptive.”

According to news reports, the sixth-grade student at Lawton Chiles Middle Academy, near Tampa, refused to stand for the pledge in the February 4th incident, calling the American flag racist and describing the national anthem as offensive.

The boy’s substitute teacher Ana Alvarez reportedly asked him if living in the United States is “so bad,” why not go somewhere else to live? To which the boy replied: “They brought me here.”

The Washington Post reported that Alvarez then responded to the student, who is black, by saying: “Well you can always go back, because I came here from Cuba, and the day I feel I’m not welcome here anymore, I would find another place to live.”

Alvarez said she then called the school’s front office “because I did not want to continue dealing with him.”

The student yelled at the administrative dean and a school resource officer with the Lakeland Police Department after they came to the classroom, accusing them of being racist and repeatedly refusing to leave the room.

“Suspend me! I don’t care. This school is racist,” the student, who is black, told the dean as he walked out of the classroom with his backpack, according to the affidavit.

According to a statement from the Lakeland Police Department, the boy then “created another disturbance and made threats while he was escorted to the office.” He was later charged by police with disruption of a school facility and resisting an officer without violence.

Lakeland police said in the news release that the student was not arrested for refusing to recite the Pledge of Allegiance. “This arrest was based on the student’s choice to disrupt the classroom, make threats and resisting the officer’s efforts to leave the classroom,” police said.

So, let’s get this straight. An 11-year-old was arrested for “disruption of a school facility” and “resisting an officer without violence,” the latter of which I didn’t even know was a thing. Essentially, a child was arrested for making a scene about standing for a flag in a country that was founded on the principle of freedom.

The American Civil Liberties Union of Florida was understandably outraged over the sixth grader’s arrest.

“This is outrageous. Students do not lose their First Amendment rights when they enter the schoolhouse gates,” the group said in a statement via Twitter. “This is a prime example of the over-policing of Black students in school.”

Students do not lose their First Amendment rights when they enter the schoolhouse gates. This is a prime example of the over-policing of Black students in school. https://t.co/cSkzWcm33Q

The boy’s mother, Dhakira Talbot, said that Alvarez’s response to the situation “was wrong” and her son should never have been arrested and taken to a juvenile detention center.

“She was way out of place,” Talbot said of the substitute teacher. “If she felt like there was an issue with my son not standing for the flag, she should’ve resolved that in a way different manner than she did.”

Talbot told Bay News 9 that her son is in gifted classes and has been bullied at the school in the past.

“I’m upset, I’m angry. I’m hurt,” she said. “More so for my son. My son has never been through anything like this. I feel like this should’ve been handled differently. If any disciplinary action should’ve been taken, it should’ve been with the school. He shouldn’t have been arrested.”

The boy’s arrest affidavit stated that he threatened to get the school resource officer and principal fired and also threatened to “beat” the teacher, but the student denied making any threats.

Polk County Public Schools said in a statement that the resource officer, not school officials, ultimately decided to arrest the student.

Meanwhile, the school district said that students are NOT required to recite and/or stand for the Pledge of Allegiance, which echoes a 1943 ruling in West Virginia State Board of Education v. Barnette that schools aren’t allowed to require students to salute the flag or recite the pledge due to first amendment rights.

The substitute teacher said she didn’t know that students aren’t required to participate in the pledge. A spokeswoman for the school district said that officials will look at improving training for substitute teachers and Alvarez no longer works in the district.

However, the boy’s mother says more should be done so that something like this doesn’t happen in the future.

“I want the charges dropped and I want the school to be held accountable for what happened because it shouldn’t have been handled the way it was handled,” Talbot said.