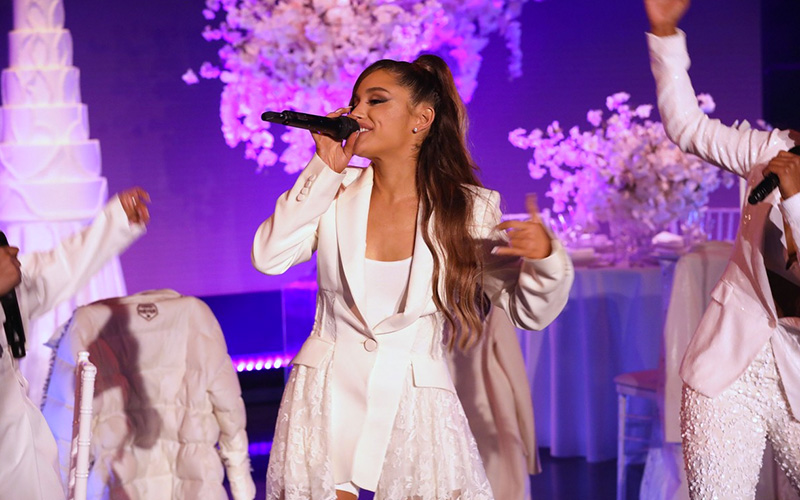 Ariana Grande nearly fell during the first live performance of her new single “Thank U, Next.”

The 25-year-old singer was performing her new track for the first time on Wednesday’s (Nov. 7) episode of The Ellen DeGeneres Show when the slip-up happened.

As Grande entertained the audience, she briefly lost her footing while stepping down from a chair, but she caught herself, saying “Oh my god” before going right back into the song as if nothing didn’t happen and laughing it off. Honestly, if it weren’t for her saying “Oh my god,” you probably wouldn’t notice.

Grande and her two backup dancers, wearing all-white outfits, channeled the 1996 movie The First Wives Club (starring Bette Midler, Goldie Hawn and Diane Keaton). The trio performed in front of white tables covered with flowers and a faux cake, just like the beloved film’s last scene in which the women sing “You Don’t Own Me,” with Grande and her backup performers mimicking some of the movie’s choreography.

“Thank U, Next” is described as a love letter to herself, as she opens up about her past relationships with Big Sean, Pete Davidson and the late Mac Miller, thanking them for helping her grow in different ways. One of the song’s lines addresses those moments, with Grande singing, “One taught me love / one taught me patience / and one taught me pain.”

Thank U, Next is Grande’s upcoming fifth studio album—a follow-up to her fourth album Sweetener and her second album release of the year.

In addition to performing “Thank U, Next,” Ariana also performed “Breathin,” her latest single from Sweetener. Check it out below: