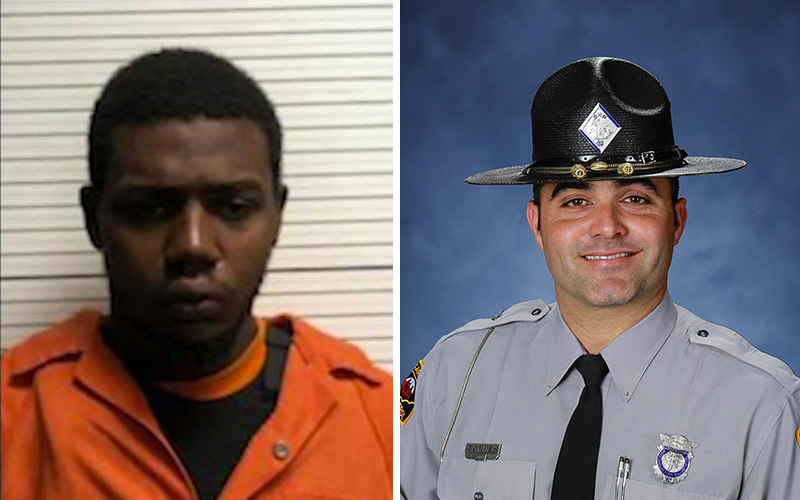 The man who was arrested for shooting and killing North Carolina State Trooper Kevin Conner during a routine traffic stop early Wednesday morning (Oct. 17) has been identified as 20-year-old Raheem Cole Dashanell Davis.

Conner was killed just after midnight after pulling Davis’ car over for speeding in the southeastern area of North Carolina.

According to CBS News, when Conner approached Davis’ white pickup truck, Davis shot at Conner several times and fled the scene. Conner was transported to a nearby hospital where he later died of his injuries, officials with the NC State Highway Patrol said.

Davis then reportedly drove 20 miles west to the Fair Bluff area of N.C., leading authorities on a pursuit for several hours.

After his truck got stuck on railroad tracks, Davis jumped out and fled on food. Police eventually tracked him down in the woods and arrested him in around 4 a.m. in Fair Bluff, near the South Carolina state line.

Davis is reportedly being held at the Columbus County Jail and has been charged with first degree murder.

Conner, an 11-year police veteran, was described as “the nicest guy you would ever meet,” per a statement by the Bladen County Sheriff’s Office.

Trooper Kevin Conner represented the best of North Carolina. I had the privilege of meeting Trooper Conner and his beautiful family during the Christmas season at the executive mansion. Ann and I offer our deepest condolences to his family during this extremely difficult time. pic.twitter.com/EBYU6fn5Gc

North Carolina Governor Roy Cooper said in a statement: “The tragic loss of Trooper Kevin Conner of the N.C. State Highway Patrol weighs heavily on our hearts. We are forever grateful for his devoted service and selfless commitment to protecting the people of North Carolina. Our prayers are with his family and friends and his colleagues in law enforcement.”

“The Highway Patrol family is mourning the loss of a hero and will forever be changed by the tragic events that have occurred”, said Colonel Glenn McNeill Jr., commander of the State Highway Patrol. “We ask everyone to please keep Trooper Conner’s family and all who knew him in your thoughts and prayers.”

Gov. Cooper ordered all United States and North Carolina flags at state facilities to be lowered to half-rise on Thursday through sunset on Sunday in honor of Trooper Conner.

Conner’s funeral will be held Sunday at 4 p.m. following visitation between 1 p.m. and 4 p.m. at South Columbus High School.