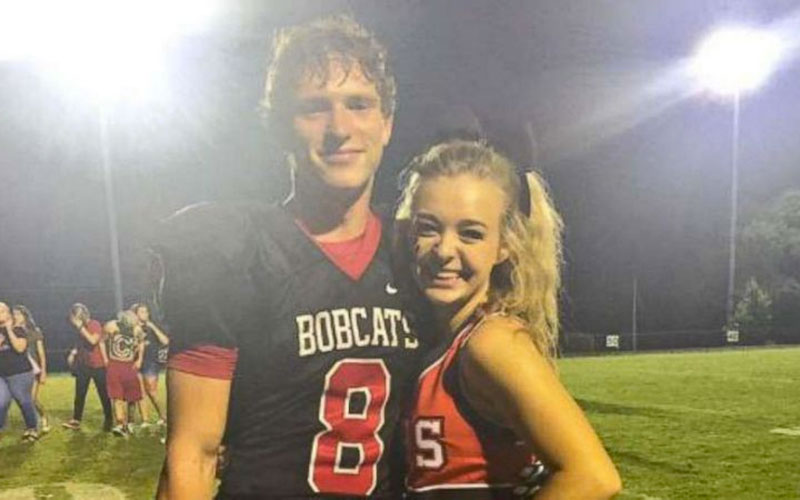 Tonight, ABC’s 20/20 will be covering the tragic death of 16-year-old Central High School student Emma Walker who was shot in her sleep by her ex-boyfriend William Riley Gaul in November 2016.

Emma was a very popular and well-liked cheerleader at her school, while Gaul was a top student, who was a bit on the nerdy side, but was also a football player and enjoyed video games.

Following Emma’s death, Gaul tried to cover up his involvement in the case until he revealed too much information to his close friends, who were able to help authorities find him guilty of her murder.

Here’s what you need to know about Emma Walker, Riley Gau, and Emma’s 2016 murder.

Emma Walker’s parents didn’t think much of their daughter’s relationship with Riley Gaul. They saw Gaul as a good kid and never deemed him as a threat to their daughter.

“Boy next door. He came in very polite, very nice in the beginning. He was very likable,” Emma’s mother Jill Walker said.

Her father Mark Walker said they even allowed them to spend quite a good bit of time together.

“I thought he was a very nice looking young man, well-mannered,” Mr. Walker said. “We would let them have some supervised visitation… He could come over to the house… they would meet up after football games… to eat, and things like that.”

2Emma’s friends noticed Riley was very controlling over her.

At first, Emma’s friends thought Riley was just a shy guy, but after a while, they begin noticing his controlling ways.

“[Gaul], he didn’t really talk to us, her friends, a lot. But I was just like, ‘Oh he’s shy’… it just seemed normal,” One of Walker’s closest friends, Keegan Lyle said. “But then, after a while, was when we got kind of concerned.”

“He became kind of controlling over her, what she did, her activities,” she continued.

Another one of Emma’s friends Lauren Hutton said Riley became clingy over Emma and wanted her all to himself.

“He got more possessive and more clingy towards her, and wouldn’t let her do certain things,” Hutton said.

Emma’s mother Jill Walker said after the two had been dating for a while, Riley began to dictate to her daughter on what clothing she could and could not wear, so much to the point that she questioned her daughter about how he was treating her.

Mrs. Walker said things really took a turn for the worse when Riley started waiting outside of Emma’s job at the supermarket for hours. “He would just wait outside for hours,” she said.

Even Emma’s friends recalled the two having huge fights over social media and text messages, and were known as the couple to break up and makeup all the time.

But what really became concerning to Emma’s mother, and would affect any parent, was when Riley began referring to their daughter as being dead in a Snapchat message, which she said Riley later tried to make seem like he posted the message out of anger.

“We, on one occasion, saw one that said I’ll see your name in the obituary. He wrote that to her, and we questioned him about it… and he said, ‘I was just angry.’ … and that’s when I started to get many more red flags,” Jill said.

4Emma’s parents went to wake her up one morning and found her dead.

On a Monday morning in November 2016, Walker’s parents followed their regular routine of waking their daughter up for school, but this time only to find her unresponsive.

When police arrived on the scene, they found a bullet hole in the wall of her room and they also discovered two bullets had been fired into the room. Emma had been shot in the head with a 9mm handgun, one bullet striking her behind her left ear and the other lodged in her pillow.

5Riley Gaul instantly became a suspect in the case.

Knox County Sheriff’s Office Lt. Allen Merritt, the lead detective in the case, told “20/20″ that everyone kept naming Riley as the person of interest.

“Everybody kept giving us the name Riley Gaul, because of their relationship, because they had seen the way that Riley had treated her, the way he’d talk to her,” Merrit said.

Walker had also recently ended her relationship with Gaul, but he was still contacting her after she broke things off. Gaul had also started acting very strangely over them parting ways and Emma was determined this time not to take him back.

6Days leading up to Walker’s death, she received an anonymous text saying that Gaul was kidnapped.

Before being shot to death, Emma was sent text messages telling her that Riley was kidnapped and that she would have to cooperate in order for him not to be hurt.

“Go to your car with your keys,” the text read. “I’ve got someone you love. If you don’t comply I will hurt him. We have him now,” one of the messages read.

“If you don’t care about him anymore then it shouldn’t bother you. Call the police, and he dies. Your choice… If you’d like to hear his final screams, give me a call. He’s in a ditch beside [the] house. It’s a shame you can all of a sudden not value someone’s life,” read another text she received.

Emma was suspicious Riley was behind the text messages the whole time, and shortly after receiving the messages, she found him in a ditch outside her friend’s home. The next morning, an unknown man dressed in black showed up to her home banging on her door, and less than 48 hours later, she was found dead.

A friend of Riley’s later confirmed he was the man dressed in black.

7The bullets in the gun that killed Emma matched a gun that was owned by Riley’s grandfather.

The same weekend Emma was killed, Riley’s friend Alex McCarty said Riley confided in him that he had stolen his grandfather’s gun for protection and that someone was out to get him and Emma.

“He ended up telling me that he was so fearful for his life that he had stolen his grandfather’s gun, and he showed it to me,” McCarty said. “I held it in my hand that night.”

“I was very worried. He reassured me over and over again that he was the farthest thing from suicidal,” McCarty continued. “He was just so scared of these people who were out to get him, were out to get Emma.”

McCarty and others told detectives about the gun Gaul had and how he feared people were out to get him. After speaking with Knox County Sheriff’s Office detectives, Gaul denied ever showing McCarty his grandfather’s gun and later question McCarty on why he told authorities about the gun.

Gaul also tried to convince McCarty and friends to not speak to the police anymore and told them he was going to get rid of the gun, which finally led them to believe that he was responsible for Emma’s murder.

McCarty and another one of Gaul’s friends Noah Walton both knew if they could help authorities find the gun Gaul had in his possession it would easily identify Gaul as the murder suspect. The shell casings at the murder scene were from a 9mm handgun, which matched the same gun Gaul showed them he stole from his grandfather.

Authorities warned the two men of the dangers and concerns of trying to help find the murder weapon, but the two were all in.

“Those two young men contacted us and asked if they could help us get what they believed to be the murder weapon back,” Knox County Sheriff’s Office Lt. Allen Merrit told ’20/20.’ Obviously, there’s concerns for their safety. We went over all that with them and they were still adamant, very adamant that they wanted to do this. They understood the dangers and the concerns, but they wanted to do it.”

In order to make the mission successful, detectives wired the two teens up with microphones, a transmitter where police could listen in, and a video camera hidden in a key fob, and planned out a sting operation to recover the potential murder weapon.

McCarty and Walton invited Gaul over to play video games to get some information out of him, but instead of getting a confession, Gaul denied killing Emma and tried to get his friends to tell authorities they were on LSD and alcohol and did not give accurate information when they spoke to authorities.

“He basically wanted to nullify all our previous statements by saying we were under the influence and we didn’t know what we were talking about,” said Walton. “I was like, ‘Okay, sure, bro, my bad. I didn’t know I was going to get you in trouble.’”

Eventually, Gaul showed them the gun and through a code word they were able to notify the police who were waiting on standby the whole time.

Cops arrived at the scene and arrested Gaul, who was freaking out about getting caught.

9Riley Gaul was hit with several charges for the murder of Emma Walker.

After being arrested and somewhere near 30 witnesses testifying against him, Gaul was charged with first-degree murder, stalking, theft, reckless endangerment and being in possession of a firearm during a dangerous felony. He was also sentenced to life in prison.

Gaul’s attorney argued in court that he had never meant to kill Emma Walker, but had fired the gun to try to scare her and get her attention. He also said Gaul denies being the mysterious “man dressed in black” who was on Walker’s doorstep.

10Riley apologized to Emma’s parents, but still acts like the whole situation was accidental.

“I’m sorry I took Emma away from you, that I robbed you of the experience of watching your daughter grow up,” Riley told Emma’s parents in court. “What I can do is tell the truth about that night… I wanted to scare her… I never meant to take Emma’s life. Again I am sorry.”

Meanwhile, his friends think his sentencing was more than fair.

“Take a life, give a life. It’s exactly what he deserves, honestly,” said McCarty.