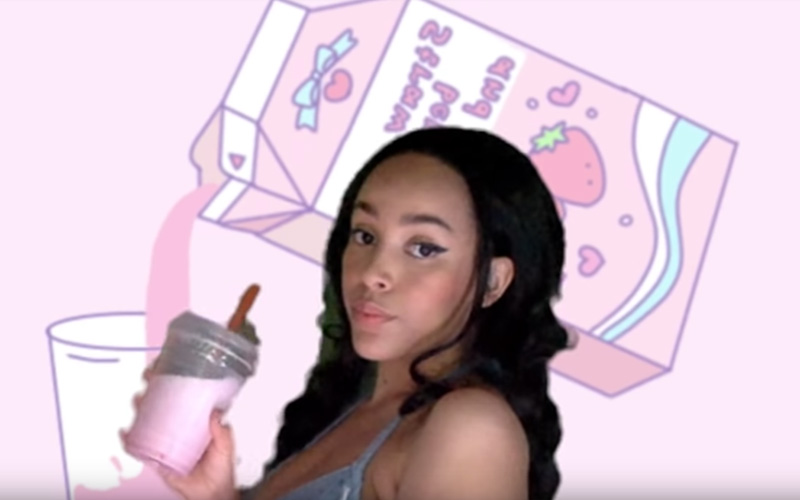 If you’ve spent any time on the internet this month, you have probably heard about Doja Cat and her infectiously viral song/video “Mooo!”

The song sees Doja rapping hilarious lines like “Bitch, I’m a cow” and the visual sees Doja rocking a variety of cow-inspired looks. It’s weird, it’s catchy, it’s probably the best thing on the internet right now. She even got a cosign from Chance the Rapper!

However, Doja has now come under fire for some tweets using homophobic language that someone pulled from the depths of Twitter and brought to the surface.

Back in 2015, Doja used the word “f****t” in some now-deleted tweets, and fans tweeted their disappointment about it. One person said “wtf 🙁 is this” with a screenshot of Doja calling Odd Future rappers Tyler, the Creator and Earl Sweatshirt “f****ts” in an old tweet, to which Doja responded by writing “lmfaoooooo.”

After folks got pissed off at that response, she replied with a backhanded apology, using the f word again.

doja cat you either do or don’t hate gay people there is no “i think” pic.twitter.com/bNbg0EUCyl

That initial response resulted in a major online backlash over the way she approached the situation. Apologizing for the use of a slur while repeatedly using said slur is pretty counterproductive, tbh.

"homophobia? why should i be afraid of a faggot?" – doja cat

This is what Doja Cat’s apologies sound like right now pic.twitter.com/3gpTCSWS1C

I can’t believe Doja Cat doesn’t understand how saying the word f*ggot is offensive to the gay community. Cows are supposed to be very intelligent animals.

Even actress Debra Messing shared her thoughts on the drama:

SERIOUSLY, @DojaCat?! How can you be so ignorant? Do know how many people you are hurting? Use your fame and platform for Good. It’s a privilege. pic.twitter.com/5ZiqI3ZVJw

After finding herself on the receiving end of even more backlash from her “apology,” Doja issued another apology, apologizing for the first apology.

“I have used horrible derogatory and hateful words toward people out of ignorance. I just want you guys to know that you’re incredibly special and I hold you dearly to my heart. I’m sorry for anyone I’ve offended or hurt deeply. You are all worth love and support. No one deserves to be discriminated against for their race, religion, or sexual orientation in any angle or sense. I don’t want you to look at me as a role model. I just want you to hear my music and the joy that you take from that is the most important part. I love making music with you. Thank you for everything to this day.”

Then, for some reason, she deleted the apology for her first apology, and posted a third, more concise one:

“I apologize for the derogatory terms I’ve used in the past and no one should be discriminated against for their race, religion, or sexual orientation. I love you and I hope to make more great music with and for you in the future. Thank you.”

Doja Cat, the artist responsible for 2018’s latest viral video and song “Mooo!”(Bitch I’m a Cow) is under fire after ‘homophobic’ tweets resurfaced.

The backlash increased after she posted, then deleted two different apologies, before sticking to a third and final one.? pic.twitter.com/W5RWkhgMfK

Hopefully Doja Cat has learned her lesson and will make better choices from now on. We’d hate to see her loooose her newfound fame.