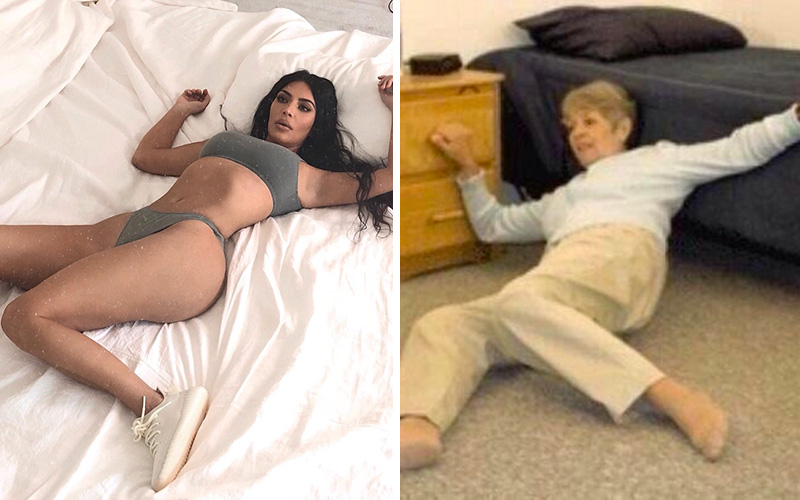 Kim Kardashian became the subject of hilarious memes on Twitter after she was accused of trying to steal Beyoncé’s thunder following her Vogue cover reveal.

It may be pure coincidence, but every time Beyoncé does something important, Kim seems to follow right behind by posting a sexy photo on social media. According to the BeyHive, however, Kim’s sexy posts are no coincidence.

Just hours after Beyoncé’s Vogue cover and essay were revealed online, Kim hopped on Instagram and Twitter and posted a photo of herself wearing a thong to promote her Yeezy sneakers. She captioned the photo “Like Butter,” referencing the sneakers’ name: Yeezy Boost 350 V2 Butter trainers.

Sure, posting sexy pics is what makes Kim Kardashian Kim Kardashian, but her posting this particular pic the day of Bey’s Vogue cover reveal is interesting because, as the BeyHive pointed out, those Butter 350 Yeezys came out two months ago in June 2018. Coincidence or nah? Probably the latter.

In response to Kimmy K’s desperate grab for attention, she was dragged all over Twitter by fans who turned her awkward photo into a hilarious meme.

Kim sweetie just log off for the day. Today is about BEYONCE and Vogue. We can promote your husband another [day]. Thanx hun,” Twitter user @Mavura123 tweeted. “It never fails. Every time Beyonce does something monumental, Kim has to be like, “Hey look at me!” and the most embarrassing part is that it’s so thinly veiled.”, @MorganJerkins said.

Along with Kim’s attention-seeking antics, the picture’s awkwardness is what sparked the hilarious reactions. As you can see in the photo, Kardashian can be seen laying on a messy bed in an awkward position, with her arms stiffly raised above her head and her legs splayed out below—kinda like a crime scene chalk outline or, even funnier, the elderly lady in the Life Alert commercials.

Check out the hilarious memes below:

Omg this looks like when Peter rolled on Lois while they were sleeping pic.twitter.com/MEMC8YelsX

*Everyone talking about Rihanna and Beyoncé and their Vogue covers*

toys when Andy walked in the room pic.twitter.com/fnaTdWJy7K