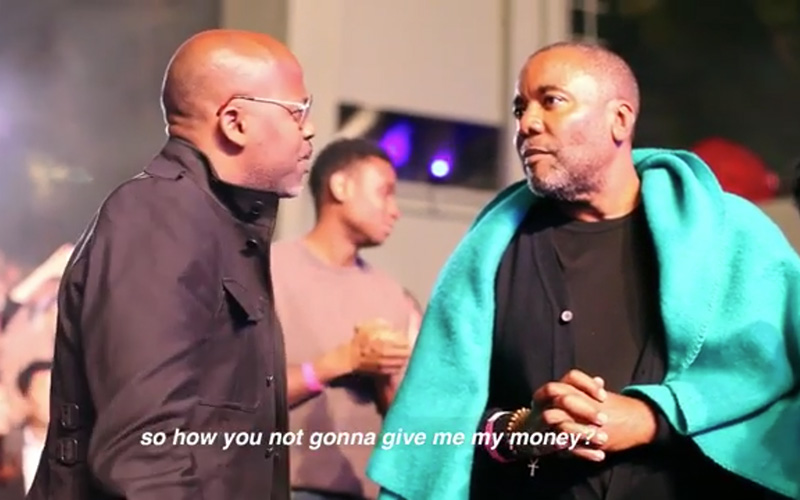 Years ago, Damon Dash lent Lee Daniels $2 million to produce the 2004 movie “The Woodsman.” In return for the money, Dame says he received a written agreement from Daniels that promised him executive producer credits, 50 percents of the film’s rights, and a guarantee that the $2M investment would be repaid in full with interest. Apparently, that never happened and Dame filed a lawsuit in 2014.

In 2015, Dash and Daniels settled the suit, with Dame’s attorney Natraj Bhushan calling it a “creative, fair” settlement that “calls for them to work together in the not-so-distant future.” It looks like that never happened, and Dame wants his money back not now, but RIGHT NOW.

Earlier today, the Roc-A-Fella Records co-founder shared a video on Instagram showing him confronting Daniels in what appears to be a church service, telling him that he needs his money and he’s willing to file another lawsuit to get it if need be. He captioned the clip:

I straight up loaned this dude Lee Daniels @theoriginalbigdaddy 2 million to pay for his dream of being a director…it was the money I was using to fund my movies and stay Indy…he promised I get my money back in months…then he makes precious and goes missing so he doesn’t have to pay me…then then Butler…empire…same sh*t Why does this dude feel like he doesn’t have to pay me?…why do I have to look crazy to get my money back…or go to court…ask @theoriginalbigdaddy why he doesn’t feel like he has to pay me even though he has it…what type of sh*t is this.. #paywhatyouowe I’m going to put this whole thing on my ig tv in a few… true definition of a culture vulture @culturevultures_book …eats off the culture but Robs the culture at the same time… see you back in court Lee your gonna pay me what you owe…please everyone ask him way he doesn’t think he has to pay me..

It’s clear from this video that Dame is NOT playing about his coins, and could you honestly blame him? $2 million (that’s MILLION, with an M) is no small amount. And if someone who clearly has the money (Daniels’ net worth is significantly higher than $2 million, especially when you consider he’s the creator of hit shows like “Empire” and “Star”) is holding out, then you have to do what you have to do, even if that means taking them to court.

According to Deadline, Dame Dash has filed another lawsuit—this time for $5 million—claiming Lee Daniels promised to try to get him an executive producer credit for a Richard Pryor biopic, along with 5 percent of Daniels’ backend profits and didn’t hold up to his end of the agreement.