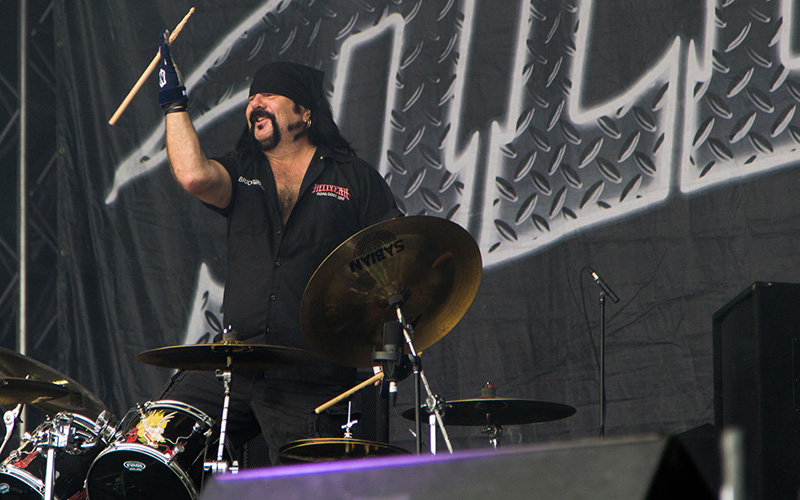 Vinnie Paul—a legendary drummer for various heavy metal bands, most notably Pantera—has died at the age of 54. Paul’s rep confirmed his death to Billboard. Paul passed away on Friday (Jun. 22) in Las Vegas.

“Vincent Paul Abbott aka Vinnie Paul has passed away,” Pantera said in a statement on its Facebook page. “Paul is best known for his work as the drummer in the bands Pantera and Hellyeah. No further details are available at this time. The family requests you please respect their privacy during this time.”

How did Vinnie Paul die? What was his cause of death?

While Vinnie Paul’s official cause of death hasn’t been revealed, TMZ reports that the rock legend died in his sleep at his home in Las Vegas. According to the gossip site, “His body’s been turned over to the medical examiner to determine a cause of death, and after that he’ll be flown back to his home state of Texas to be buried between his mom and brother.”

According to Billboard, Paul (born: Vincent Paul Abbott), along with his brother, Dimebag Darrell, formed the heavy metal band Pantera in 1981. The group later found mainstream success with second lead singer Phil Anselmo. Pantera went on to earn four Grammy nominations and had nine albums chart on the Billboard 200, including 1994’s Far Beyond Driven, which debuted at No. 1.

After Pantera broke up in 2003, the Abbott Brothers founded another group called Damageplan. Dimebag Darrell was shot and killed onstage during a concert in Columbus, Ohio on December 8th, 2004, according to Billboard.

Paul had been playing the drums for the heavy metal supergroup Hellyeah since 2006.

Vinnie Paul was born in Texas and credited the Lone Star state for inspiring his sound. He told OnlineDrummer.com in an interview a few years back: “The Texas thing is part of it, growing up on a healthy dose of ZZ Top and Stevie Ray Vaughan, but I also was a metal-head from day one. Led Zeppelin, Black Sabbath, Kiss, Van Halen, all my favorite bands had really great grooves to their music.”