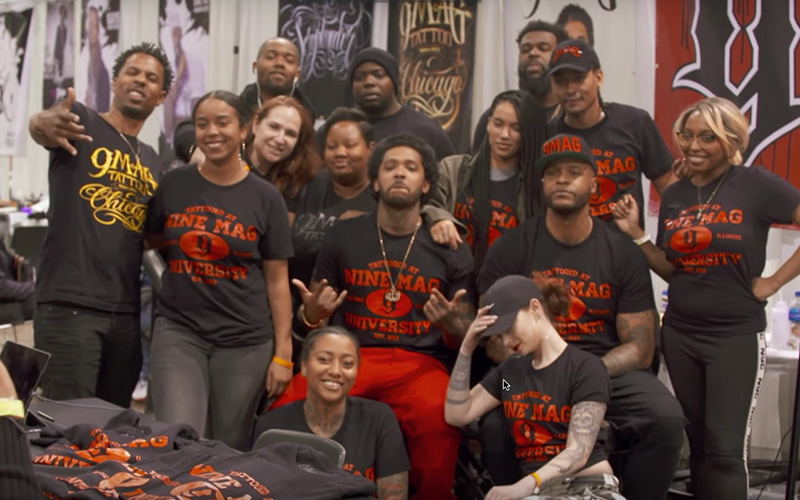 After last season’s events, which saw the departure of Kat in the season 3 finale, Ryan is out of the tattoo game, and the rest of the crew is shocked to find out that Ryan has shut 9 Mag down.

“That family, that space, that sh*t is done,” Ryan tells Van in a one-on-one meeting. “9 Mag is no more! NO MORE!” Van shouts to the crew back at the shop.

In an effort to prove that he’s done with the drama, Ryan, with his girlfriend Rachel by his side, sets out on a mission to “reinvent” 9Mag, and his new shop has “space for six [new] artists.”

So where does that leave the old crew? Opening their own shop called “Loyalty Ink,” that’s where. And tensions run high when the old 9 Mag crew (aka the new “Loyalty Ink” crew) sees Ryan’s NEW 9 Mag crew at a tattoo convention.

Even Ceaser from “Black Ink Crew (New York)” was shocked to hear about the changes at 9 Mag. “You opening up a new 9 Mag?” he asks Ryan. “I don’t owe nobody over there sh*t,” Ryan responds. “I’ve seen this before,” says Ceaser, “I know how this story ends. Once you cross this line, ain’t no going back.”

Other highlights from the BICC Season 4 super trailer include Danielle burning Terrence’s sh*t, Ashley finding out Don cheated on her for the fifty-leventh time and fathered ANOTHER baby outside of their relationship, and Lily throwing hands with Danielle AND Charmaine.

It’s safe to say, Season 4 of “Black Ink Crew Chicago”—which premieres Wednesday night (May 30)—might be its most turnt yet.

Watch the super trailer up top.