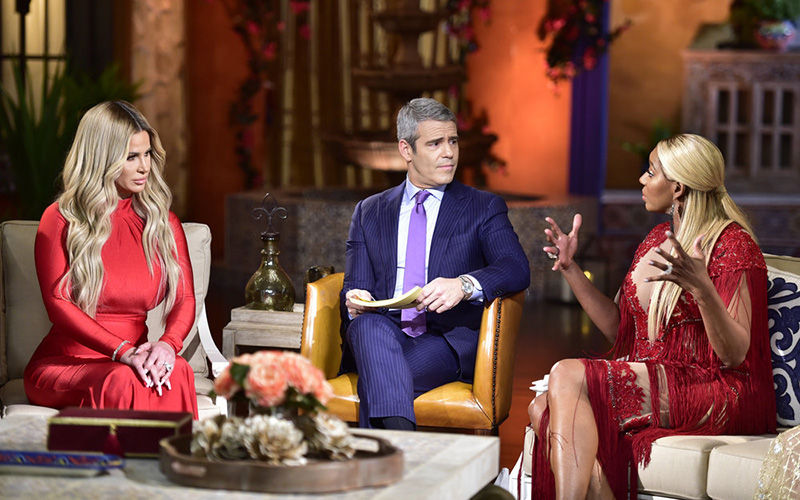 Even though the season’s been over for over one month, get ready for NeNe vs. Kim round 752.

Real Housewives of Atlanta stars NeNe Leakes and Kim Zolciak-Biermann refuse to let their longtime feud go and have each taken to social media to rehash season 10 of the Bravo series and their reunion showdown.

NeNe writes that Kim deserved to be called out for her RHOA season 10 behavior, while Kim alleges that NeNe attempted to kick her during the reunion taping.

The social media barbs come days after Andy Cohen told radio host Jenny McCarthy that he believes Kim was “ganged up” on by the other housewives at the reunion and felt he should have done more to control the situation.

“Atlanta this season, I had a really rough time with the last chunk of that when Kim was on because it got very… I hate a five against one situation. It is a gang up and the problem is that Kim was not … It’s less problematic when the person is good at taking up for themselves and Kim was not having an easy time with her words … No one was listening to me and I really did not have control of the room and I wish that I had walked off.”

NeNe responded to Cohen’s comments on Monday after several fans sent the video to her. “If Kim was [ganged] up on, she deserved it!” she wrote on Twitter. “That’s what happens when u talk reckless abt EVERYBODY!”

Kim shared her own thoughts after a fan tweeted they were shocked that Cohen now feels the ladies ganged up on Kim even though he called her out at the reunion said she had been “negative all season.”

Once again Kim blames editing and says she had “positive moments” this season and the audience didn’t get to see how rude the women were to her during filming and at the reunion, including when NeNe allegedly tried to kick her.

“Sweetie you didn’t see an 1/4 of what happened this season or an 1/8 of reunion…the reunion was disgusting! Nene trying to kick me, girls making fun of my children, mocking my … Husband, I do not pick on people’s children, husbands!”

Sweetie you didn’t see an 1/4 of what happened this season or an 1/8 of reunion! I had positive moments Irregardless Im comfortable w/ who I am and what I stand for it’s television! The reunion was disgusting! Nene trying to kick me, girls making fun of my children, mocking my https://t.co/NSbpqLXUAX

Husband, I do not pick on people’s children, husbands! You are clueless human being! Sending love and light

The major conflict between NeNe and Kim during season 10 began after Kim claimed NeNe had roaches in her house based on a video Kim’s daughter, Brielle Biermann, recorded. NeNe and several of the housewives believed the accusation had a racist subtext.

NeNe also accused Kim of holding on to the video and a photo of NeNe’s car parked in handicap parking spot in order to use them against her at some point during the season.

NeNe Leakes is expected to return to Real Housewives of Atlanta for season 11. However, Kim Zolciak was not asked back and it’s being reported she never wants to make another appearance again due to her season 10 portrayal.