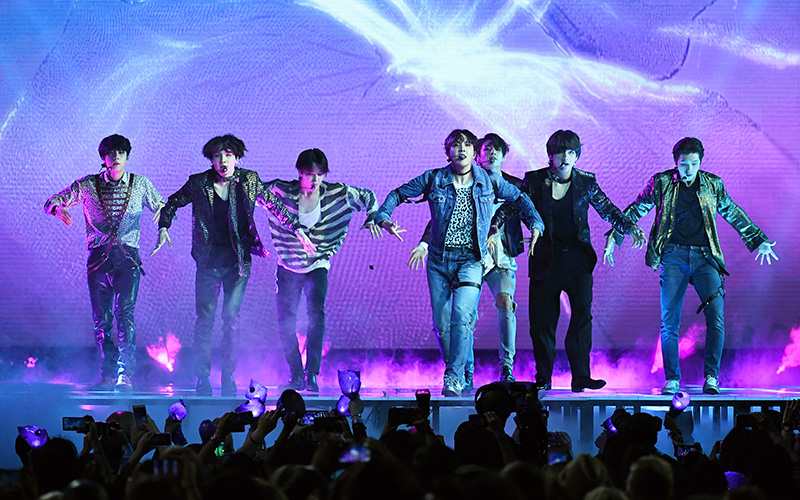 This may (or may not) be news to you, but, did you know that the biggest boy band in the world hails from South Korea? If you’re unfamiliar with the “K-Pop” genre, you gone learn today!

The septet (that’s seven members for all you math whizzes out there) became the first ever Korean act to perform at the Billboard Music Awards when they slayed the MGM Grand Garden Arena stage in Vegas for the debut performance of their new single “Fake Love.”

The group showcased its flawless choreography and impeccable stage presence as fans, who call themselves the “BTS Army,” cheered along with stifling screams. BBMAs host Kelly Clarkson even came prepared with a pair of earmuffs to protect herself from the audience as she introduced the band.

In fact, before Clarkson was even able to get a word in edgewise, the BTS Army had already started screaming at the top of their lungs. “I knew it was going to happen,” she joked. “I’ve been in a room with these people… y’all are crazy! Crazy loud, I love it!” she said, before calling BTS “the biggest boyband in the world.”

kelly clarkson really brought an ear muffs because armys is loud af and everyone stand up for BTS ohmygod yes that’s THE POWER OF BTS AND ARMY! pic.twitter.com/H5VYsQxSNe

The applause swelled even more as the seven band members appeared on stage one-by-one at the beginning of the song, which serves as the lead single from their third album, Love Yourself: Tear, which was released last Friday (May 18) and set a pre-order record in South Korea with 1.44 million copies sold before the album even dropped.

“Fake Love” is currently sitting at No. 14 on Spotify’s Global Top 50 chart, and its accompanying music video racked up 41 million views on YouTube in its first 24 hours, the best debut ever for a K-Pop artist.

Sunday night was a huge win for the band, who beat out big names like Justin Bieber and Demi Lovato for the Top Social Artist Award for the second straight year. The nominees for that category are determined by fan engagement on social media, and the artists’ fans ultimately vote for the winner.

“Some of our fans really told us that our music really changed their lives,” band member RM told the crowd while accepting the award. “And now we realize our words truly carry weight thanks to you guys.”

BTS will perform “Fake Love” again this Friday (May 25) when they return to The Ellen DeGeneres Show.