GOSSIPONTHIS.COM Celebs Offset Shares Bloody Car Crash Photos: “I Could Have Been Dead From... 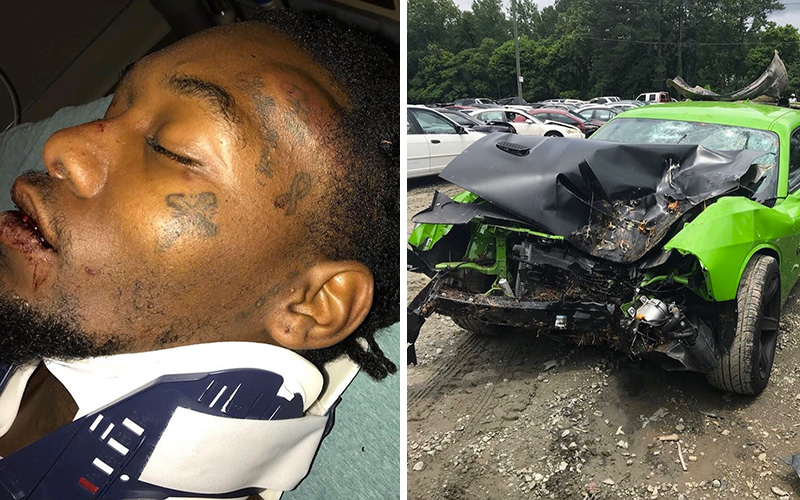 Days after being hospitalized after a car crash that totaled his Dodge Challenger, Offset took to social media to express his gratitude for coming out of the crash alive and to share the photos of his injuries

The Migos rapper posted on Instagram a number of photos showing his bloody face, hands and arms, as well as the damage his Dodge Challenger sustained.

Check out the pics below, but be warned, they’re pretty gruesome:

According to TMZ, the accident was reported by a passerby around 2:30 a.m. early Thursday morning (May 17) in Atlanta. When police arrived at the scene of the crash, the vehicle had been abandoned with no witnesses in sight, and they called a tow truck to remove the vehicle from the scene.

Authorities have now reportedly opened up an investigation to find out exactly what caused, why Offset left the scene without reporting it, and if anyone with with him when it happened.

Here’s what’s interesting—our sources say after the tow truck arrived, 2 people pulled up in another car. We’re told one of them took items out of the Challenger before it was towed … and was heard saying Offset crashed while swerving to avoid a pedestrian who had run out in front of him.

Law enforcement sources say there were no victims, witnesses or damage to other vehicles—but cops have not been able to confirm the Migos rapper was behind the wheel.

Offset was briefly hospitalized after the crash and was quickly discharged from the E.R. Cardi B was said to be by his side the whole time he was at the hospital, and she tweeted about the incident, confirming that Offset made it out A-OK.

Sooo grateful and happy today .God be giving messages in the weirdest way ?I love you @OffsetYRN ??????

Hours after he was released from the hospital, Offset posted a video of him smoking a blunt in a recording studio, where he showed off his bandages and E.R. wristband.

Offset’s rap group Migos are set to hit the road with Drake for a summer tour called “Aubrey and the Three Amigos.”

Tickets are on sale now. Check out the dates for “Aubrey and the Three Amigos” tour here.