GOSSIPONTHIS.COM Celebs WATCH: T.I. Argues With Cop Over Why He Was Arrested in Video... 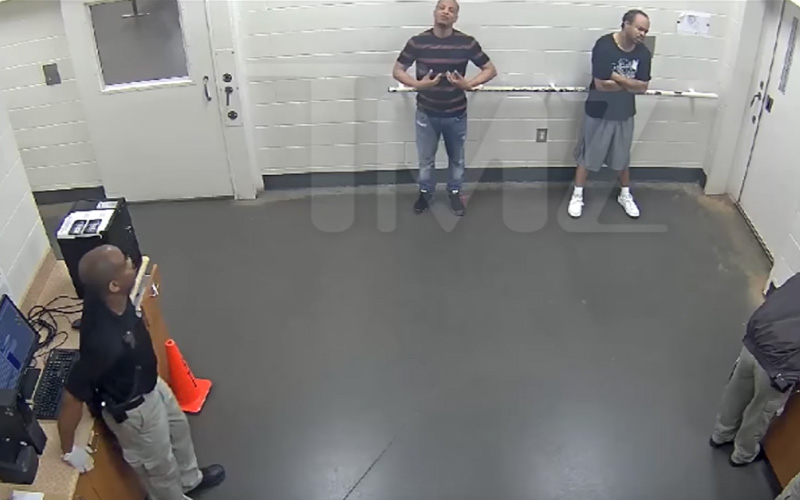 New video footage has been released from inside the jailhouse where T.I. was held after being arrested early Wednesday morning (May 16) near his home in Henry County, Georgia. The jailhouse security footage shows T.I. arguing with a police officer as he asks the cop to explain why they arrested him.

T.I. was jailed Wednesday after he got into a verbal altercation with a security guard outside his gated community. According to reports, the rapper had lost his key to enter the neighborhood, in which he owns a multi-million dollar property with his wife Tameka “Tiny” Harris, and the guard would not let him through.

In the video, the rapper is cool, calm and collected while going through the booking process at Henry County Jail, and he asked the arresting officer why he was being jailed. The officer told T.I. he was “acting like a fool,” which T.I. strongly denied.

T.I. said, as a tax-paying citizen and multi-million dollar homeowner, he had a right to confront the security guard working the gate, but the officer said that the guard “didn’t have to answer to [him].” The officer said T.I. “shouldn’t have come back,” a sentiment T.I. clearly disagrees with.

Frustrated, T.I. reminded the officer that he still didn’t answer his question as to why he was arrested, and the cop responded, “I’ll answer in court.” T.I. said, at that point, he would be speaking to his lawyer, and the cop said, “that’d be awesome” just before the video ends.

According to T.I.’s version of events, the guard was sleeping and T.I. had to wake him up. He said the guard claimed he couldn’t find him on the resident directory, so T.I. had Tiny call. He said she asked what the hold-up was and said, “Just let him in.” T.I. said the guard yelled at Tiny and asked her “Who the f**k do you think you is talking to me like this?”

T.I. said that pissed him off, and he admits to yelling obscenities at the guard, reminding him that he pays his salary. After arguing with the guard for some time, T.I. was eventually allowed to enter the gated community. T.I. then demanded the guard tell him his name so that he could report him to a supervisor, and the guard refused, so T.I. went on about his way.

Not too long afterward, feeling some type of way about the interaction, T.I. returned to confront the security guard once more after he had been let in and asked him for his name again, and the guard refused once again.

T.I. admitted to telling the guard “You can step outside the booth and into the street, so we can talk,” however, he said had no intention of getting physical. Feeling threatened at that point, the guard called the police, and T.I. heard him give the following description: “Yes, a black male right in front of me in a striped shirt.”

According to the police report, when the cops arrived on the scene, they smelled alcohol on T.I.’s breath. T.I. admitted he had a drink before walking back to the guard’s shack, and was arrested on the spot on misdemeanor charges of simple assault, disorderly conduct and public drunkenness. He was released from the Henry County Jail around 8 a.m. Wednesday morning after posting $2,250 bond. T.I.’s upset over the incident because the responding officers spoke to the guard and his supervisor privately, then handcuffed him and hauled him off to jail without even asking his side of the story or looking at the surveillance footage from the property to confirm what really happened.

Overall, T.I. says the thing that upset him the most was the fact that the guard, who is Black, never revealed his name nor accepted responsibility for falling asleep on the job and yelling at Tiny.