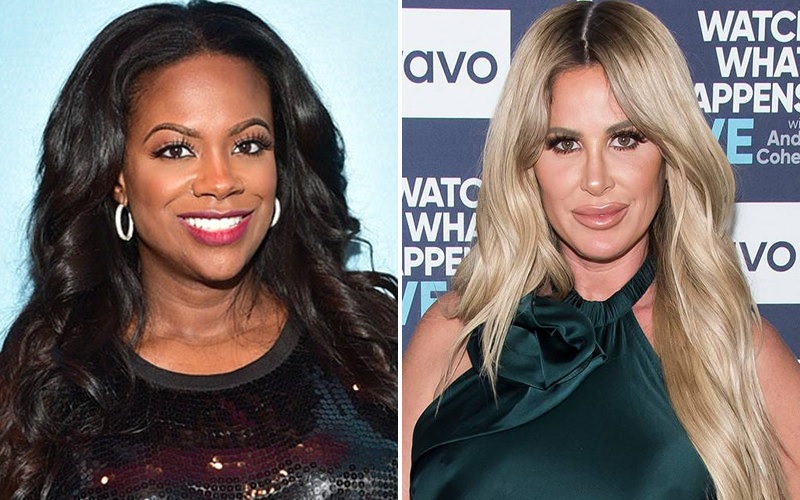 Why watch the show when the real drama is going down on social media? While the latest episode of Real Housewives of Atlanta was still airing, Kandi Burruss and Kim Zolciak engaged in an all-out social media war.

In a tweet on Sunday (Jan. 14), Kandi begged “lying ass bitch” Kim to stop making accusations about her and her husband, Todd Tucker’s sex life.

“I’m sick of these bitches lying on me. @KimZolciak I have NEVER wanted you or your box… lying ass bitch”

I’m sick of these bitches lying on me. @KimZolciak I have NEVER wanted you or your box. And stop swearing on your kids while you’re telling lies. Lying ass bitch. Somebody’s really reaching for a permanent peach here… This is my house. You’re just a visitor!

“I also know a lot about, you know, Kandi… On my kid’s life if God strikes me dead, I wouldn’t let her eat my box,” Kim told Sheree. She doubled-down on the claim in her confessional. “I’m not saying that to be mean, I’m telling you the f**king truth!”

The allegation was too much for Kandi, who faced date rape allegations and sex dungeon rumors throughout last season and went in on Kim on social media. “PSA: stop lying @Kimzolciak!” Kandi wrote in a separate tweet.

Because Kim just loves being messy and rude, she also got on Twitter to call Kandi and Todd “full on swingers” and said that Kandi only has an RHOA peach because she (Kim) is the one who helped make the show popular in season one. “If it weren’t for me there would be no house. Remember I built this house!” Kim tweeted.

If anybody is lying it’s you @Kandi You and your husband are full on swingers fucking all kinds of girls and can NEVER admit it. And bitch if it weren’t for me there would be no house. Remember I built this house!” ?

Kim and Kandi have not seen it for each other since Kim refused to pay Kandi any royalties for writing and producing her little song, “Tardy for the Party” in 2009, which resulted in a lawsuit.

Nonetheless, they have let bygones be bygones and seem to be pretty cordial over the past few years. But this latest mess Kim has conjured up just may cause round two for the frenemies.

All I can say is that the season 10 reunion show is already must-see TV as Kim is expected to join the ladies and I’m sure this social media war will also be addressed.

The Real Housewives of Atlanta is currently airing Sunday nights on Bravo.