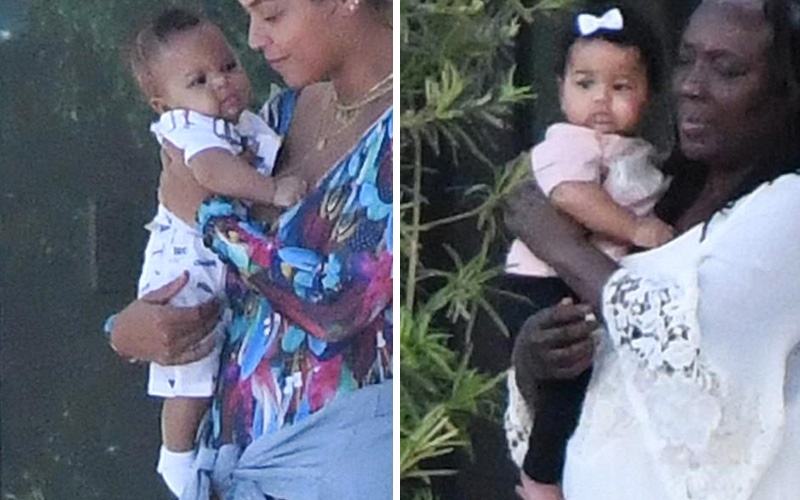 Beyoncé and JAY-Z’s twins, Rumi and Sir Carter, will be five months old this month, and the only time we’ve seen them was when Beyoncé posted that semi-obscure photo on Instagram that nearly broke the Internet.

Well, that changed Saturday (Nov. 11) when the twins were spotted for the first time with their superstar parents as they enjoyed a little fun in the sun at a mansion in Miami.

The Carters were in Florida for Jay’s concert at the Amway Center in Orlando on Saturday night. The rapper will perform in Miami at the American Airlines Arena Sunday night.

Despite Bey and Jay’s efforts at keeping their children’s faces out of the public eye, the paparazzi were able to snap a few photos of the Carter twins with Beyoncé and their nanny, as well as their grandmother, Tina Knowles-Lawson.

And unlike the staged photo Queen Bey shared on Instagram, we can actually see the twins’ faces, and they’re just as adorable as we imagined.

According to Grandma Tina, Rumi and Sir have “very different personalities.”

Last month, she told Entertainment Tonight, “They’re doing great. They are absolutely beautiful and so much fun. I mean, I haven’t ever been around twins, but it’s so cute, I can hardly take it.”

She added, “[It’s crazy] … It’s just really, really different with two babies. I mean, a boy and a girl. They have very different personalities.”

Richard Lawson, Tina’s husband, also talked about how big sis Blue Ivy has “grown up” since Beyoncé and JAY-Z brought the twins home in June.

“It’s making her grow up, it’s bringing some maturity,” said Richard. “She’s only 5, but you can see the transition in terms of her being a little more calm.” He added, “Because she’s the diva, but she’s sharing her diva-dom.”