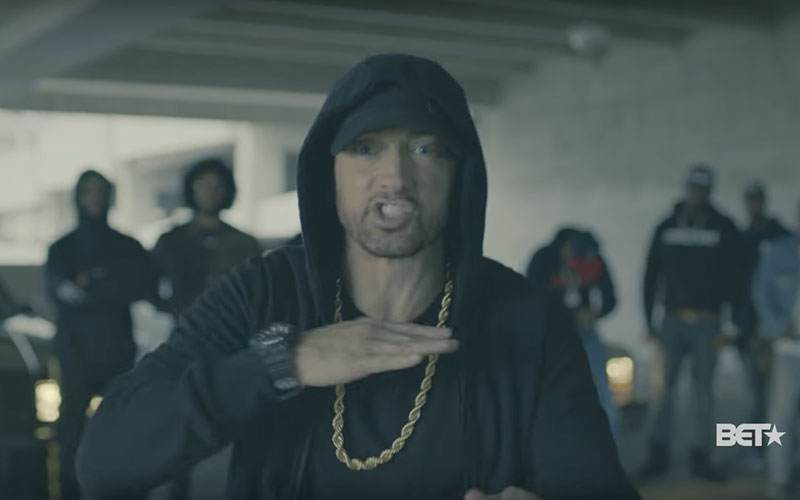 The real Slim Shady has stood ALL THE WAY UP, and he is NOT here for Donald Trump and his shenanigans.

Eminem unloaded on the man who is unfortunately currently the President of the United States, and he held absolutely nothing back as he ripped into Mango Mussolini in a four-minute freestyle for the 2017 BET Hip-Hop Awards Cypher.

In an acapella freestyle, Em went after the Cheeto-in-Chief for his (mis)use of Twitter, escalating tensions with North Korea, supporting the Ku Klux Klan, and being the overall POS POTUS that he is. Mr. Mathers also addressed controversial topics such as the NFL protests, Puerto Rico, the border wall and more. Slim Shady also name-dropped Steve Bannon, Colin Kaepernick and others.

“But we better give Obama props, ’cause what we got in office now is a kamikaze that’ll probably cause a nuclear holocaust. And while the drama pops, and he waits for shit to quiet down, he’ll just gas his plane up and fly around until the bombing stops,” Eminem rapped. “Intensity’s heightened, tensions are rising. Trump, when it comes to giving a shit, you’re stingy as I am. Except when it comes to having the balls to go against me, you hide ’em, ’cause you don’t got the f**kin’ nuts, like an empty asylum.”

Eminem ended his freestyle with a message to his fans who are Trump supporters:

“Any fan of mine who’s a supporter of his, I’m drawing in the sand a line—you’re either for or against. And if you can’t decide who you like more and you’re split on who you should stand beside, I’ll do it for you with this: f**k you!”

Most of Twitter (even some celebs!) seemed to be here for Eminem’s anti-Trump freestyle:

My face when Eminem has the wokest cypher #HipHopAwards pic.twitter.com/zlvQisgzcn

I appreciate you @Eminem ?? pic.twitter.com/nwavBwsOkQ

Racism is the only thing he's Fantastic 4(fantastic for), cause that's how he gets his rock off, he's orange. Sheesh @Eminem!! ??????#United pic.twitter.com/wcL28BCWpy

Greatest literature of all-time:
1) Letter From Birmingham Jail
2) Eminem in the BET CYPHER

Thank you @Eminem for using your platform as a catalyst to expose Trump and the racial inequalities in America. ? #HipHopAwards

I don't care for him at ALL but I can appreciate the Trump dragging. https://t.co/SdmsnXFrOD

Me while listening to #Eminem body Trump during his cypher #EminemCypher ?? pic.twitter.com/3Ao62tTs4D

Eminem is the only one with the balls to call out his own fans ??

If nothing else, it was a stark reminder to white frat boys that their fave rapper thinks they're racist morons. I can dig it. #Eminem

Listen. Eminem Just Said Fck You To Any Of His Fans Who Support The Donald. ? On Television. ?????? pic.twitter.com/exRy579T5Q

When White people see Eminem from now on pic.twitter.com/p2thQp9C3r

Trump in the AM: "Eminem hasn't been relevant in years. His album sales and ratings have tanked. He isn't a real singer like Kid Rock. Sad!

This Donald Trump after listening Eminem cypher on #HipHopAwards pic.twitter.com/Mhka7kfTc8

When Donald Trump finds out why him and Eminem are trending pic.twitter.com/IKUUeXFNrZ

BREAKING- Trump says he is a better rapper than Eminem and is willing to battle him in 8 Mile to prove it.

After 27 years of doubts about rap I am now an @Eminem fan.

Dear White People, That's how you use your white privilege. #Eminem ??????#HipHopAwards

Eminem is welcome to the cookout pic.twitter.com/nlxeFcg7Tp

When I was a kid, Eminem inspired me to fight bullies. As an adult, he's echoing my disdain for a tyrant. He may be flawed, but ever a fan.

Thank you @Eminem for saying what most these other rappers are afraid to say??? pic.twitter.com/C8y2yK8tG8

Protect Eminem at all cost

Of course there were a few outliers (i.e. people who didn’t appreciate Em’s freestyle against the Overly Tanned Tyrant):

I made it less than 8 seconds into this before turning it off https://t.co/W9ZJyL7boK

Eminem’s freestyle comes hot on the heels of rumors that the rapper is working on a new album. In fact, at the moment, rumors are swirling that the project will be released on November 17th, but that hasn’t yet been confirmed by Em or his label.