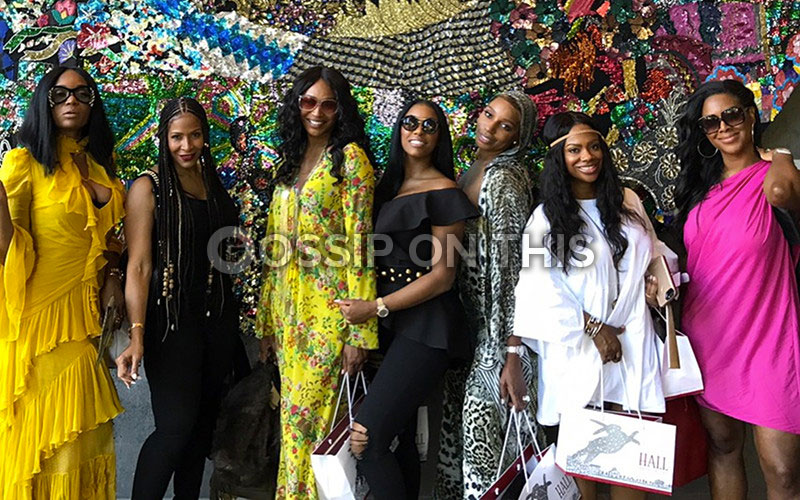 The Real Housewives of Atlanta Season 10 cast have filmed their annual girls’ trip!

In the past, the RHOA ladies have traveled to Africa, Anguilla, Mexico, and Hawaii. However, they’re keeping the first group trip of season 10 continental. Sources say the RHOA ladies hit two Cali spots: San Francisco and Los Angeles.

“And we OUT! Let’s hope I survive this sh*t! It’s been a minute,” NeNe Leakes wrote on Instagram on July 28.

Sheree Whitfield and Porsha Williams also shared a few photos of their flight to Cali. A few of the women have been documenting the trip on Instagram, which also gives us the first look at the official cast. As expected, NeNe, Sheree, Porsha, Cynthia Bailey, Kenya Moore, and Kandi Burruss will all be peach-holding housewives. But notice there is no Phaedra Parks, basically confirming she was fired after season 9. However, RHOA fav, Marlo Hampton, joined the ladies in Cali, but is believed to a “friend” of the show.

As with any RHOA trip, there’s gonna be some “manufactured” drama. Sources say Nene and Porsha have been throwing shade at each other and the group has divided into two sides: Team NeNe, Cynthia, Kenya, and Kandi and Team Porsha, Sheree, and Marlo. (Although you just know Marlo secretly wants to be in the good graces of NeNe and Kenya). Though there is friction within the group, it seems Marlo is trying her best to join Team NeNe. She looked quite comfortable with the OG housewife and Cynthia while turning up in the club and dancing to “Never Too Much” by Luther Vandross and “Candy” by Cameo. Marlo seems to be the only RHOA “friend” to join the peach-holding cast. Photos that have surfaced don’t show Shamea Morton or returning OG, Kim Zolciak-Biermann.

Season 10 of Real Housewives of Atlanta premieres in November on Bravo. But before you go, please enjoy these three looks Cynthia Baily slayed while in Cali.