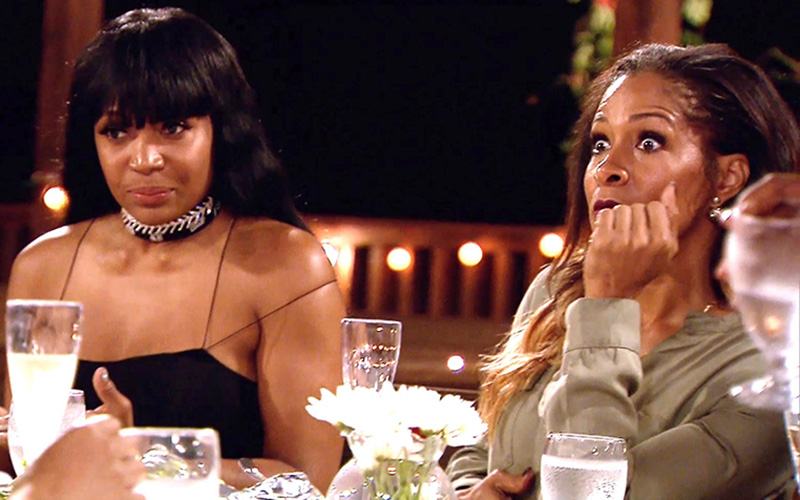 Is this Real Housewives of Atlanta or Love & Hip Hop Atlanta? The hit bravo reality show has begun filming its 10th season and a major fight has reportedly already broken out on set. Real Mr. Housewife is reporting the RHOA cast got together Thursday night (Jul. 6) to film a dinner scene. However, two new cast members reportedly got into it with each other, with one throwing a drink and the other being escorted out.

UPDATE: Lamarra George Says She Is NOT Joining “Real Housewives of Atlanta” and Was NOT Involved in Drink-Tossing Fight

Things got heated between newcomer Lamarra George and Porsha Williams’ BFF Shamea Morton. The two got into each other’s faces which resulted in Lamarra throwing a drink in Shamea’s face. A source tells the Housewives news site:

“Shamea then tried to defend herself but was escorted out before any serious physical altercation could ensue.”

It’s unclear what sparked the altercation, but some of the ladies are already picking sides. NeNe Leakes, Cynthia Bailey, and Sheree Whitfield are all friends with Lamarra and took her side. The source added:

“NeNe even went as far to say that if they wanted her to stay on the show, they would have to get rid of Shamea.”

While Kenya Moore stayed out it, Porsha reportedly barely tried to defend her friend. However, their longtime friendship was tested in season 9 due to Phaedra Parks’ string of lies, which also included Shamea.

“Kenya didn’t get involved in the drama at all and basically ran away to call her husband as soon as things got crazy. Porsha… walked away as well.”

Official casting for season 10 has not been revealed. But it is believed that Lamarra and Shamea are peach-holding housewives for the upcoming season, presumably filling the void left by a most-likely fired Phaedra.

Kandi Burruss and Kim Zolciak-Biermann did not attend the dinner, but guess who did? The source confirmed that model Eva Marcille filmed with girls, but did not reveal her involvement in the Shamea/Lamarra incident or who’s side she was on.

Season 10 of Real Housewives of Atlanta is set to premiere sometime in November.