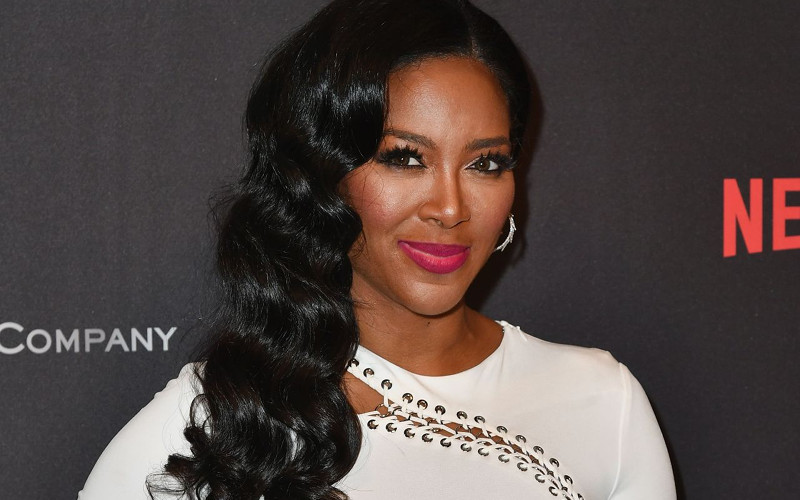 Is Kenya Moore officially an Atlanta housewife? We all know her Real Housewives of Atlanta peach is safe, but what I’m wondering is if Kenya is now somebody’s wife. The internet is buzzing that the reality star just got married in a private ceremony.

Blogger Tamara Tattles first broke the news and posted photographic receipts. The blogger reports Kenya married her secret boo of nearly eight months over the weekend in a private ceremony in St. Lucia. “A Tamara Tattles spy has sent photographs which appear to show Kenya getting married… I know for a fact that the couple has been at Sugar Beach, the new hot spot at the foot of Pitons, for several days. The thing that pushed this story over the edge for me is that Kenya’s best friend, Brandon Deshazer, was there. No one gets married without their GBF.”

Kenya has posted two photos on Instagram in recent days showing a beach getaway. “#AllINeed #Thankful,” she captioned a photo with 2 wine glasses, 2 sunglasses, and an ocean backdrop.

The identity of Kenya’s possible new husband is currently unknown. She recently revealed on Watch What Happens Live! that she was dating again, following her tumultuous relationship with Matt Jordan, and she has stated she’s “very happy” with her romantic life in other interviews. However, she has never given a name nor has any man publicly confirmed a relationship recently.

Tamara Tattles also reports that Kenya’s boyfriend/husband is age appropriate and has adult children. However, he was “disturbed” by Kenya’s reality show drama which is why she chose to keep the relationship private and off TV.

Kenya Moore’s wife status has yet to be officially confirmed (hell, knowing Kenya this could very well be a movie or photo shoot). However, we wish the hopeless romantic well and hope she’s finally formed the family she’s always wanted.