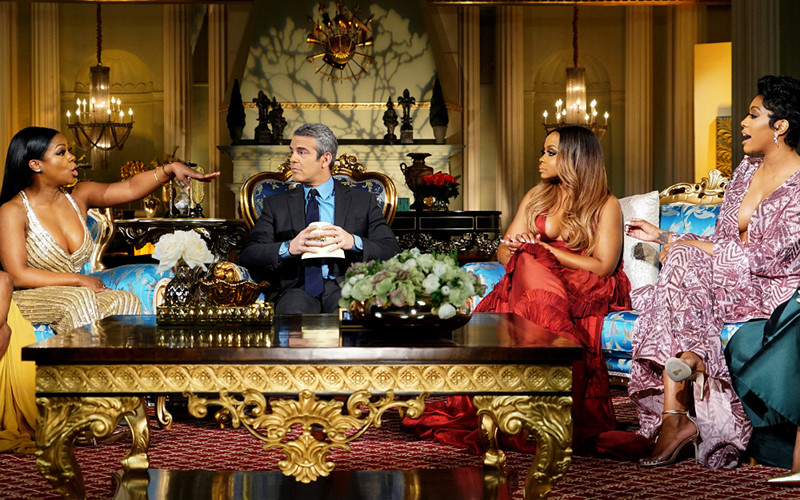 The word on the street is that Phaedra Parks will not return to The Real Housewives of Atlanta after her season of lies. Though Bravo has not made an official announcement, Andy Cohen may have confirmed the speculation himself.

Housewives franchise creator and executive producer Cohen briefly mentioned Phaedra while talking to E! News on the blue carpet during the NBCUniversal upfronts on Monday (May 15). While he didn’t explicitly state Phaedra was fired, he did question her future on the show because fellow castmates like Kandi Burruss and Kenya Moore refuse to film with her now.

“The question that we look at now with Phaedra is, when the reunion ended, none of the other women wanted to have anything to do with her. So that’s what you have to look at. How do you shoot a show about a group of friends when no one is speaking to one of the friends?”

Again, Bravo execs are currently in the process of deciding contract options for the 10th season of RHOA and nothing has been officially announced.

Castmates, viewers, and possibly even Bravo execs turned on Phaedra when it was revealed during season 9’s four-part reunion that she was source of the rumor that alleged Kandi and husband, Todd Tucker, attempted to drug and sexually take advantage of “housewife” Porsha Williams. She also admitted to making up other lies concerning Kandi and Todd.

Though it didn’t air on TV, Phaedra reportedly blamed RHOA producer Carlos King for feeding her these lies. Bravo denied this claim, but King is also not expected to return to the series next season.

Bethenny Frankel of Real Housewives of New York City also debunked the notion that a producer would orchestrate such drama. “I’ve been doing this for 10 years. I actually, sadly, consider myself to be a veteran. The producers do not make you do these things at all,” she said at the NBCUniversal upfronts.

“The producers don’t know exactly what’s going on, so they might say, ‘Are you going to talk to Kandi about this?’ They don’t know. They would never [manipulate storylines]. It would be a massive problem. This isn’t The Hills, it’s real. It really is. So yeah, no, that would never happen.”

Porsha recently admitted that she hasn’t spoken to Phaedra since filming the reunion. If the other women also refuse to film with the attorney as Cohen suggested, Ms. Phaedra Parks really did get her peach snatched.