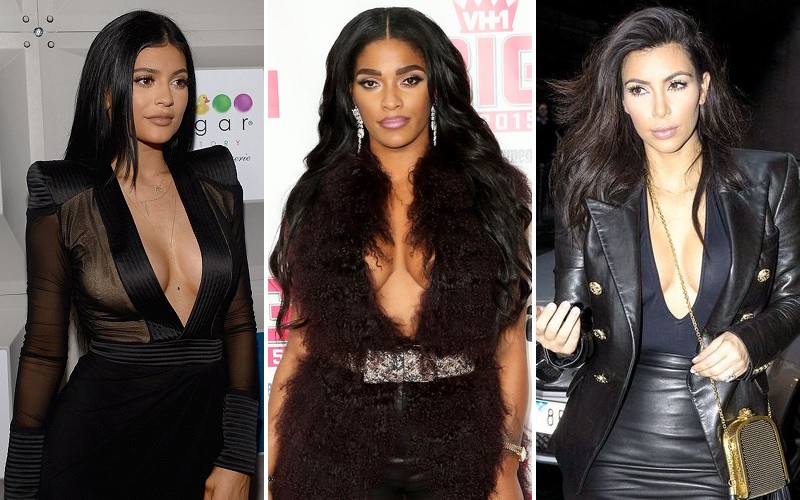 Is Kim Kardashian trying to cop Joseline Hernandez’s style? According to the Puerto Rican Princess, not only Kim, but the entire Kardashian/Jenner clan want to be like her.

Joseline has served as the guest co-host on The Real for the first week of May. During Tuesday’s show (May 2), the hosts discussed a recent “who wore it best” poll between Joseline and Kylie Jenner. The two wore the same $1,400 Balenciaga boots.

The Love & Hip Hop Atlanta star obviously felt she wore it better, but also went on to claim that it’s the reality show socialites that have copied her style. “Well first of all, I’m her mama. She’s my daughter, okay?” Joseline said of Kylie. “She copies me!”

Just like me, you may have initially been giving Joseline the side-eye, because Kim and crew have definitely carved a certain fashion aesthetic for themselves and its undeniable that they have become fashion trendsetters. However, they have also faced heavy criticism for cultural appropriation.

So maybe Joseline does have a point that the Kardashians/Jenners have stolen their style from “her,” meaning girls from a similar background as hers.

However, the Puerto Rican Princess actually does bring the convo right back to herself as she explains her argument.

Joseline, girl; You had us, then you let us down.

According to Hollywood Life, Kim and Kylie aren’t even paying Joseline any attention. One source says Kylie doesn’t even know who Joseline is.

“When Kylie [Jenner] heard what Joseline [Hernandez] said about being her ‘mama’, she was like ‘who?’ Kylie does not follow her fashion styles because she doesn’t really know who she is. She thinks her comments are ridiculous and she knows Kim [Kardashian] would feel the exact same way.”

And she does. Another Hollywood Life source says Kim isn’t copying anyone’s style because she is a “fashion icon.”

“Look, Kim respects women like Joseline who are trying to make it in the industry and out there hustling and doing their thing. But for real? Kim’s a fashion icon! She’s been slaying these girls with her ever evolving style since before anyone even knew or heard of Joseline Hernandez.”

“Kim gets it though. Everybody wants to be her. Everybody wants to hate on her. Like Britney Spears, everyone wants a piece of her. Joseline wouldn’t be the first girl on the block, or even the last, to compare herself to Kim or her family by comparing themselves to her.”

I’m gonna go ahead and give Joseline props for kinda calling the Kim and sisters out for cultural appropriation (even though she probably didn’t know that’s what she was doing). But I don’t think they are specifically copying the LHHATL star’s style.

And, for what it’s worth, I think Kylie actually wore the boots better.