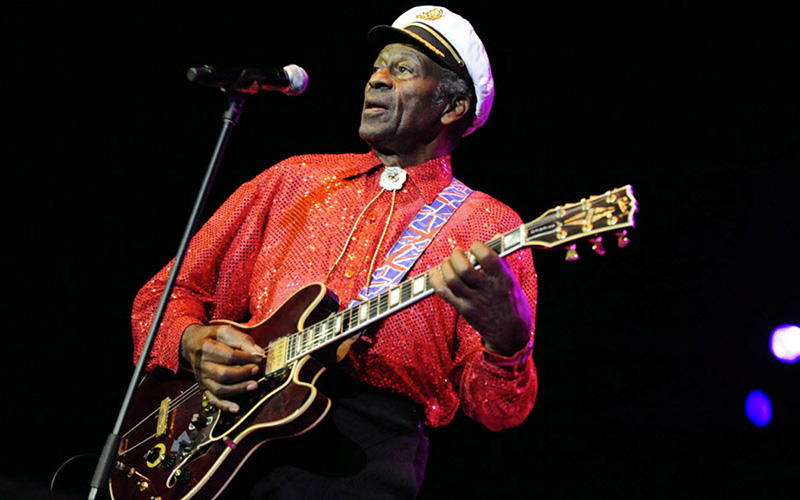 UPDATE: TMZ is reporting that Chuck Berry’s official death certificate lists his cause of death as “natural causes” and an autopsy will not be performed.

Rock and roll legend Chuck Berry has died at the age of 90.

The St. Charles County Police Department in Missouri confirmed Berry’s death Saturday evening (Mar. 18) on Facebook saying that they responded to a medical emergency earlier in the day where they found an unresponsive 90-year-old man.

An official cause of death has not been revealed yet, however a post on his official Facebook page says that his health had been deteriorating recently. “Though his health had deteriorated recently, he spent his last days at home surrounded by the love of his family and friends,” the post read.

“St. Charles County police responded to a medical emergency on Buckner Road at approximately 12:40 p.m. today (Saturday, March 18),” the police department shared. “Inside the home, first responders observed an unresponsive man and immediately administered lifesaving techniques. Unfortunately, the 90-year-old man could not be revived and was pronounced deceased at 1:26 p.m.”

The fourth child in a family of six, Chuck Berry was known as a pioneer of rock and roll music and directly influenced the early music of The Beatles, The Rolling Stones and The Beach Boys. He was among the first group of performers to be inducted into the Rock & Roll Hall of Fame in 1986.

In addition to his many other accolades, Berry was the recipient of a Grammy Lifetime Achievement Award in 1984, was recognized in 2000 at the Kennedy Center Honors and was presented with Sweden’s prestigious Polar Music Prize in 2014.

He was best known for songs such as “Johnny B. Good,” “Maybellene,” “Roll Over Beethoven,” “Sweet Little Sixteen,” “School Days,” “Rock and Roll Music,” “Back in the U.S.A.” and “Memphis, Tennessee.”

The rock legend had announced on his 90th birthday back in October that he planned to release a new album, titled “Chuck,” in 2017, which would be his first new album in nearly four decades.

He recorded the project in his hometown of St. Louis with his longtime backing group, which includes his children Charles Berry Jr. and Ingrid Berry. The album was dedicated to his wife of 68 years, Themetta Berry. “My darlin’ I’m growing old! I’ve worked on this record for a long time. Now I can hang up my shoes!” he said.