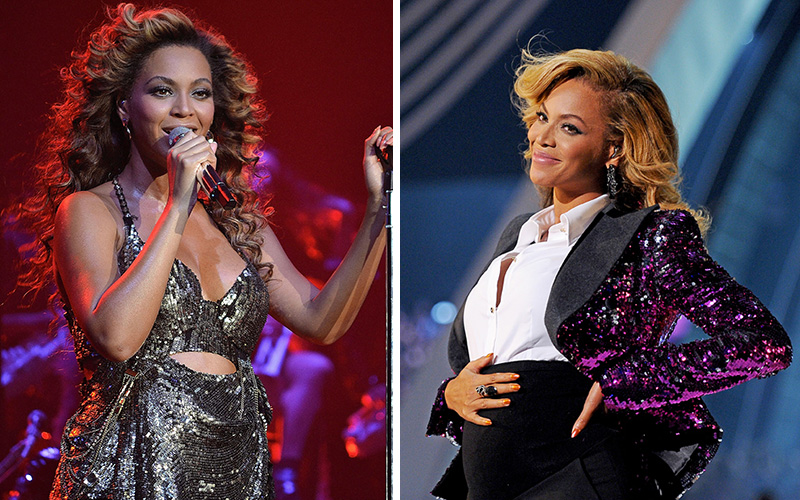 In case you haven’t heard, BEYONCÉ IS PREGNANT WITH TWINS!!!

She made the HUGE announcement about an hour ago via Instagram, and the internet has been going crazy ever since.

But, after calming down from the excitement, everyone is asking questions, like, “How is she going to perform at Coachella pregnant as hell?” and “IS SHE EVEN GOING TO PERFORM AT ALL?!”

According to TMZ, AEG Live — the company that is producing Coachella — was completely in the dark about her pregnancy, which “now makes her headlining gig at the festival problematic.” YIKES.

The gossip site goes on to report that Beyoncé is somewhere between four and five months pregnant, which means she’s already pretty far along. If that’s true, by April, she’ll be about six or seven months pregnant, and because she’s having twins, her baby bump will be HUGE.

One AEG source joked, “The show will go on. She’ll just borrow Dave Grohl’s big chair,” the one he used after he broke his foot.

Fortunately for Beyoncé though, this ain’t her first time at the rodeo. When she was pregnant with Blue Ivy in 2011, she performed at the MTV Video Music Awards — where she announced her pregnancy — and she also did a sold-out four-night residency at NYC’s Roseland Ballroom.

However, she was about four months pregnant then with just one baby (not six or seven months with two babies like how she’ll be at Coachella). And even then, she spoke about how hard it is performing while pregnant:

“When you’re pregnant, it’s a little bit harder to breathe, so it was hard doing all the choreography and singing at the same time.”

Beyoncé hasn’t said anything about her upcoming Coachella set, so as the old saying goes, no news is good news. It looks like she’ll still perform, but accommodations will certainly have to be made for her, and don’t expect to see a re-incarnation of the Formation Tour, which required A LOT of dancing.

Oh, and just in case you were wondering, it also looks like she’s DEFINITELY performing at the Grammys. See what her stylist just posted on Instagram below:

Note the words “TMinus11Days.” Today is February 1st, and the Grammys are February 12th. You do the math.