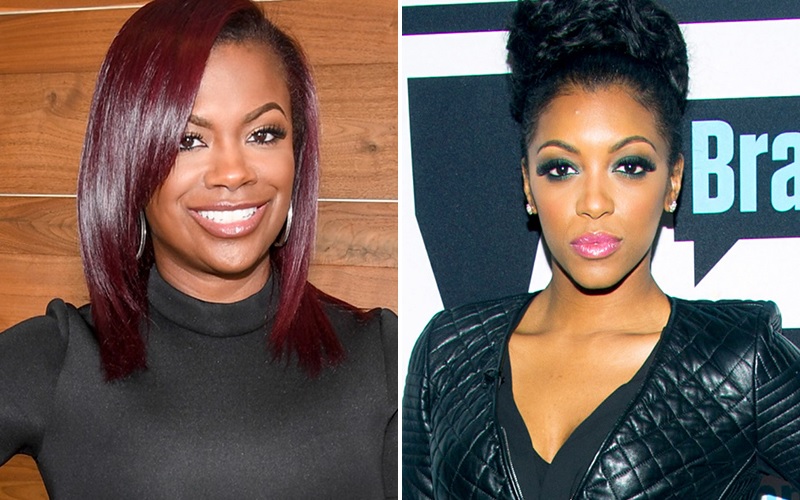 This storyline, which was teased in the season’s super trailer, is about to air in an upcoming episode. However, Kandi is already spilling the tea on went down between she and Porsha in an interview with TooFab.

Kandi spoke with TooFab’s Brian Particelli to reveal what really happened. As she has previously stated, Kandi reconfirms that the she has dipped into the lady pond in the past. This is no secret; therefore, Porsha’s claims of her being an “undercover lesbian” are simply untrue. However, Kandi spills a little more tea and says Porsha (who has made homophobic comments in the past) may be the one hiding in the closet.

“She and I, she’s kissed me in the club full out and said she wanted to do things to me, they gonna show it on the show. The point is, this girl changes her story so much. So, when I confronted her on the show about it, for saying things she said about me, she came back with this story about me and Todd trying to do a threesome and that’s how that came about. When you get to see the full show, she’s saying it in response to me confronting her. Well, you’re saying this about me, but you and I kissed before. Clearly, if I’m supposed to be in the closet, then you must be.”

Oooo this is juicy! And to top it off, Kandi, apparently, has receipts. Porsha tried to deny a kiss with Kandi ever happened, but Kandi was prepared and provided text messages that support her side of the story.

“First, it’s ‘I would never do anything with her,’ until I had brought those text messages on her honey that showed her texting me a couple days later talking about how great everything … how much fun she had and how she would rape me on camera. Honey, make up your mind. Are you just gonna own it … or are you gonna keep trying to drag me. Why? Don’t drag me, I wasn’t dragging you!”

If it seems Kandi is in rare form this season, you are right. The Grammy winner says she was tired Porsha and former show BFF Phaedra Parks being shady towards her. So, she entered the season ready for any BS they may be thrown her way.

“[A]t one point, me and the other girls were friends, I tried not to go too hard on them. Going into this season, I said, you know what, I’m just not taking anything. Anytime they come to me with some BS, I’m calling them out on it. And that’s what has happened. I’m not angry, I’m just not holding back.”

Unfortunately, she says there’s probably no hope for her friendship with Phaedra. This is probably for the best because RHOA’s resident “southern belle” is too shady and fake to be a genuine friend to Kandi.

“It’s definitely unrepairable at this point. In the past, I felt like it was repairable, but every time I would try to reach out to try to get some type of positive growth, they would do something else. It just got to the point now where I’m like ‘no, it’s so not repairable,’ it’s so broken at this point.”

Just like NeNe Leakes, I am Team Kandi in this situation. Tune it to Bravo on Sundays to watch Kandi and Porsha’s faux-lesbian drama unfold.