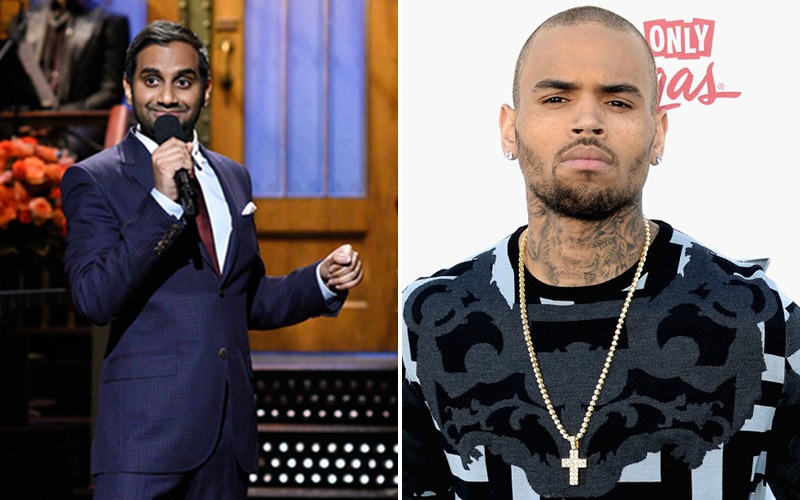 Is it really that hard for Chris Brown to remain silent and let things go every once in a while? The singer was not too pleased with comedian Aziz Ansari comparing him to Donald Trump.

Ansari hosted the first Saturday Night Live broadcast following President Trump’s (I’m never gonna get used to that) inauguration. The Master of None star discussed Trump and the concerns surrounding his presidency during his opening monologue. He joked “Donald Trump is the Chris Brown of politics.”

“I’m sure there’s a lot of people [who] voted for Trump the same way a lot of people listen to the music of Chris Brown, where it’s like, ‘Hey, man! I’m just here for the tunes. I’m just here for the tunes! I don’t know about that other stuff. I just like the dancing and the music. I don’t condone the extracurriculars’. If you think about it, Donald Trump is basically the Chris Brown of politics. And ‘Make America Great Again’ is his ‘These hoes ain’t loyal.’”

A harmless joke, right? Well, Brown wasn’t laughing. He took to Instagram to clapback. Accompanied with a clip of Ansari’s joke, Brown wrote “F*CK NO!!!!!! Somebody tell ALADDIN HOP OFF MY DICK!”

Many noted that the response was a Trump-like move, proving Ansari’s point. Calling the comedian “Aladdin,” referencing the Arabian prince from the 1992 Disney film, is also a comment tinged with racist undertones as Ansari is of Indian descent and Brown judged the comedian simply because of his brown skin.

Way to go Chris Brown. That's how you show everybody that you're not Trump. By insulting a SNL host on social media. Trump's never done that

How did Chris respond? A race reference, to "Aladdin".

Chris Brown is so lost in the sauce he doesn't even understand how calling Aziz "Aladdin" is EXACTLY why he's the Donald Trump of music. ??

In a now-deleted Instagram video, Brown also addressed Ansari’s joke, stating he “can’t catch a f*cking break” and insinuated he’s leaving the US. He then added, “Don’t f*cking trust what you see, even salt look like sugar.”

Only a brief portion of Ansari’s 9-minute monologue involved Brown, but he clearly can’t take a joke and must clapback to every comment he doesn’t like.