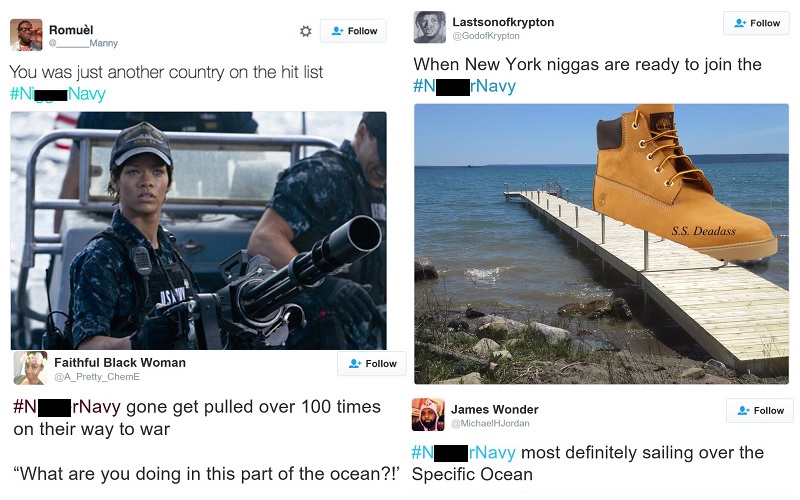 Black Twitter was on fire last night (Jan. 5) and is was all thanks to a typo by a Yahoo Finance employee.

Yahoo Finance covered a story on President-elect Donald Trump’s plan to expand the U.S. Navy. The story was shared on the news site’s Twitter account, only who ever composed the tweet did not type the word “bigger” as (hopefully) intended and wrote something entirely different.

Here's the original Yahoo Finance navy post in case you missed it : pic.twitter.com/fmrkLvPTkA

Now, Black Twitter could have responded to this in two ways: Blast the news site for blatant racism and carelessness or humor. The later was chosen and, man, did Black Twitter come with the jokes. Twitter users created a “Black Navy” complete with battleship names, uniforms, recruitment ads, playlists, and more.

When the #NiggerNavy ask you for gas money to take you across the Atlantic Ocean pic.twitter.com/0r5723OJeO

“What are you doing in this part of the ocean?!”

"Yo we round the corner"

And still be on the dock.

#NiggerNavy most definitely sailing over the Specific Ocean

Trump : "We have to stop North Korea"#NiggerNavy : "Shiid who the fuck is we?"

Nah, girl. I am NOT about to get my hair wet during basic training! #NiggerNavy pic.twitter.com/duvduQrJLE

You was just another country on the hit list #NiggerNavy pic.twitter.com/KcsFUgUG90

As “Black Twitter” became a trending topic, of course some white Twitter users tried to take away all the fun by somehow calling the social media sub-group racist. Or they tried to join in. Black Twitter was having none of it though.

Sooo.. black Twitter is racist bc they took a racist term created by white people & turned it into a joke??? pic.twitter.com/GjLoEGHu4r

The people who defend all-white country clubs because "it's a private organization" are the same people who'd say Black Twitter is racist.

It actually only made Black Twitter embrace itself even more.

Yahoo Finance’s original tweet remained posted for nearly 30 minutes before being deleted and offering an apology.

We deleted an earlier tweet due to a spelling error. We apologize for the mistake.

To be fair, the letter “B” and “N” are right next to each other on a qwerty keyboard, so this really could have been a really unfortunate typo. At least we had Black Twitter to give us a many great laughs.