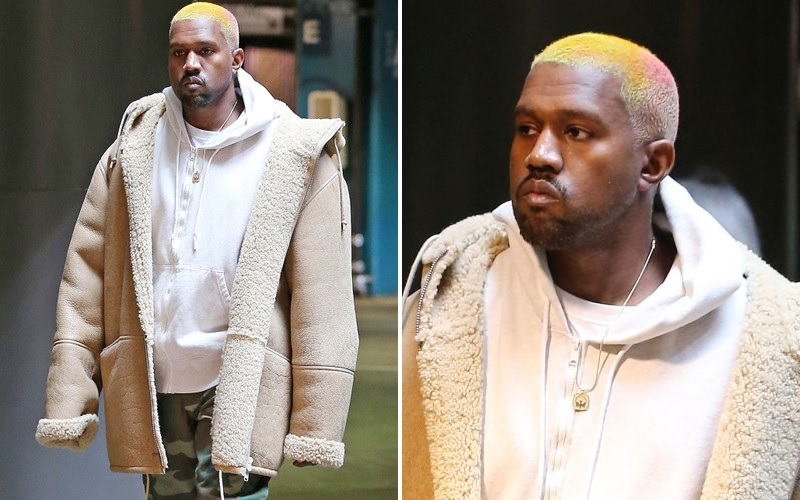 Since being released from the hospital, Kanye West has reportedly been receiving outpatient treatment and seeing a therapist daily. But, is the rapper getting any better? Given his latest fashion statement, the jury is still out.

The rapper seems be going for a new look for 2017. On Monday (Dec. 26), West debuted a fresh new hairdo that got everybody scratching their heads and cracking jokes. West was spotted heading into an LA movie theater by himself sporting a sherbet-inspired ‘do.

West dyed his hair platinum blond earlier this month after being released from the hospital. However, he has since added hints of yellow and pink.

There was no way social media wasn’t going to chime in to give humorous/shady commentary.

Hair stylist: how can I help u today?

Kanye West: u ever have rainbow sherbet?

He lookin like he wants Amber Rose's attention so bad

?? “Kanye West added something extra to his hair ?”https://t.co/cA51ECGG6E

Every time I see Kanye. He reminds me of this episode of Fresh Prince. pic.twitter.com/pXQvEd34mN

Someone tell me why Kanye Wests new hair is inspired by Rihanna's outfit pic.twitter.com/kfsGIK1w7D

West has made several appearances since the “temporary psychosis” that lead to his 9-day hospitalization, all sporting the dyed blond hair. He previewed the Rick Owens: Furniture exhibit in West Hollywood, was seen at a movie theater with Kris Jenner’s boyfriend Corey Gamble, saw The Nutcracker with Kim Kardashian and North West, and attended the annual Kardashian holiday party.

Most notably, he met with President-elect Donald Trump to discuss “multicultural issues.”

All in all, it looks like West is taking his recovery day-by-day. However, this multi-colored hair is another odd choice in a line of questionable decisions/behavior.